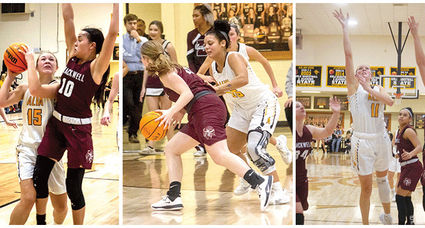 After winning first at the Pioneer Mustang Stampede Tournament and beating Chisholm in their away opener, the Alva Ladybugs were finally able to play at home Tuesday night. This was the second meeting between the Ladybugs and the Blackwell Lady Maroons. Alva beat them 62-37 in the Pioneer Tournament.

It wasn't an easy victory, but the Ladybugs did it again, defeating Blackwell 48-34 at home. The score stayed fairly even until the final quarter when Alva was able to widen the margin. The teams were tied at the end of the first quarter 9-9. Blackwell led by one, 21-20, at the half. In the low...