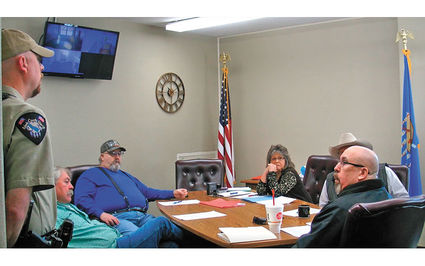 After about sixty years and untold coats of paint, the Woods County Jail interior will be sandblasted to prepare for a new paint job. The Woods County Commissioners received only one bid for the sandblasting but asked Sheriff Rudy Briggs to review it before proceeding. Sheriff Briggs and Undersheriff Keith Dale attended the commissioners' meeting Monday morning.

Briggs recommended approval of the $32,000 bid. He said a company representative came to look at the jail and talk with them before making the bid.

Briggs asked that the money for the project come out of the county building maintenance account because he needs to use his department funds to purchase a couple of new vehicles. He said the pickups being replaced will be moved for use by reserve deputies. The older vehicles currently used by reserve officers will then be declared surplus and removed from inventory.

The commissioners asked what will be done about prisoners during the sandblasting. The department plans to move them to nearby county jails. Once sandblasting is done, the county may have some of the prisoners paint the jail interior or use a work crew from BJCC.

After the bid was approved, Briggs expressed appreciation for Dale filling in for him the past three months. He said Dale really "stepped up." Briggs was out of the office due to personal reasons which included a mini stroke on Dec. 9.

Fiedler has been working on setting up repeaters at locations in the county to improve radio communication. He said once the east, west and south repeaters are set up, there will be total county coverage.

A portable building being used for that purpose at the CED site needed the air conditioner unit removed. That revealed the wall was rotting so it had to be replaced. The building will be moved to one of the tower sites to house equipment. "It's been a nightmare getting there," Fiedler said of getting better radio coverage for the county.

The commissioners approved removal of a Cat 140H grader from District 2 inventory. It was sold at the Bidadoo Auction online. The county will receive $52,290 from the sale after commission.

Due to personnel changes, the commissioners approved Patti Steelman and Nancy Lamle as requisition officers for the health department fund. Dawn McMurtrey and Alisha Diller were approved as receiving officers.

County Clerk Shelley Reed said she spent a couple of days trying to find out how to handle the bookkeeping on a $50,000 REAP grant awarded to the soil conservation department for wildfire control. She asked the commissioner to approved establishing a new fund named REAP Grant – Fund #1425 – Department #6200 which they did. Then the commissioners approved a transfer from the general government sales tax fund to the REAP grant fund account.

Reed explained that the law has changed and the court clerk now has to provide a records management report. That report showed a balance of $519.76. The sheriff's department report was not yet available.

The commissioners acknowledged the registration report from the election board. Of the 4,087 active voters in the county, 874 are registered as Democrats, 2,800 as Republicans, 26 as Libertarians and 387 as Independents. Adding the 571 voters listed as inactive, the total registered in each party is 1,009 Democrats, 3,099 Republicans, 27 Libertarians and 523 Independents.

Commissioner John Smiley gave a progress report on construction of the new county building in his district. He said he hopes it will be completed in a couple of weeks.