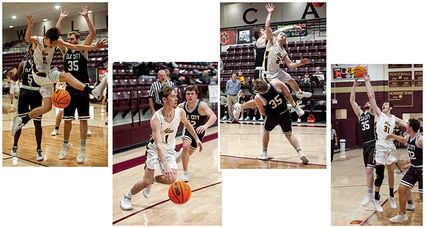 Left to Right: Alva's Jackson Feely goes up for the layup but is fouled by the Elk City defense; Alva's Cole Hague takes off to the basket with Elk City's defense on his heels; Alva's Reece Martin (2) tries to jump over the defense as the ball is knocked away from him. Alva played Elk City in the Cashion County Line Tournament Saturday morning; Alva's Baylor Rust (31) tries to rebound the ball as Elk City's Gavin Chadwick (35) takes it from him.

The Alva Goldbugs had a disappointing outcome at the Cashion County Line Tournament, losing all three of their matchups. After losing to Perry in the first round, the Goldbugs faced Cashion on Friday and Elk City on Saturday. Alva lost to Cashion 86-61 and to Elk City 78-65.

In the contest Friday, the Cashion Wildcats scored six points before the Goldbugs got on the scoreboard. Alva stayed fairly close but Cashion led by 10 at one point. At the end of the quarter, Cashion led 22-14.

Alva scored 14 more points in the second period, but Cashion built up their lead with 20 poi...