It's all about the edge 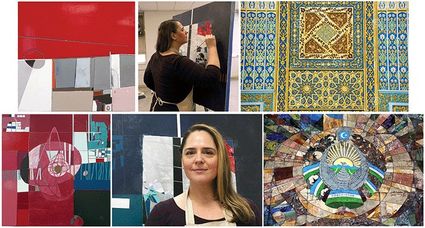 Top Left: This small work by Martynovskaya shows her interest in what happens when edges meet. None of her artwork is titled, Martynovskaya said. Middle: Martynovskaya Artist In Residence-Painting Right: Islamic art pattners on a mosque in Tashkent, Uzbekistan. Photo courtesy of Dreamtime.com Bottom Row: Left: "I really like the big areas versus the very detailed areas," said the artist, Yelena Martyovskaya. "Some of the areas seem vast, they expand and your eye doesn't settle on one thing." But the off-beat elements of the painting raise questions in the viewer's mind, who then comes in to examine the painting more closely. And there the viewer will be confronted with one of Martynovskaya's "small complexities" that force the eye to follow a maze of tiny lines that both separate smaller shapes within but that also create the cohesiveness to make it a tiny, complicated unit. Middle: Martynovskaya Artist In Residence-Yelena Right: One of thousands of pieces of art on public display in the subway stations of Tashkent, Uzbekistan. Yelena Martynovskaya, who saw these often as a child, was awed by their beauty.

Yelena Martynovskaya, Northwestern's first artist in residence of the year, creates paintings that take opposites – a vast and unmarked space, say, and a tiny, complicated one – and lays their edges together to see what will happen. She seeks the harmony among the opposites that she knows she can find.

She knows she's done it when she can feel the harmony among all the various aspects of the painting.

"It's almost like when you listen to music and you hear that something is off and you don't know why." It's not in harmony. "That's what it's like for me. I can tell when the painting's in harmony – it's kind of like musical harmony. You just know."

Uzbekistan to California: A Journey of Contrasts

Martynovskaya, 37, was born in Uzbekistan when it was still the Uzbek Soviet Socialist Republic. She lived there for the first 11 years of her life, going to school under Soviet rule – which, she said, emphasized the arts in public education, particularly the art from Europe's realism tradition.

"Art was a very important part of the curriculum since the very young age," she said. "It was very academic, and we focused a lot on realism."

Outside of those classes, Islamic art adorned public spaces, mosques – even the subway system in Tashkent, Uzbekistan's capital city, and as a little girl, Martynovskaya reveled in it.

"I was born in a very small province of Tashkent, but my memories of seeing beautiful things were in town of Tashkent, the capital of Uzbekistan, especially the subway system," she said. "I was very inspired and loved going to the metro when I was growing up there because it was like a museum. It's considered one of most beautiful subway systems in the world."

Art also decorated many of the public building exteriors. "There were also a number of Islamic architecture examples like mosques which were beautifully decorated," she said. Uzbek art and culture is characterized by vibrant colors and patterns, textiles and pottery. "As a child seeing this very captivated me," she said.

Although most images of the Soviet Union that have been presented to Americans have been of massive, bleak, concrete government buildings (or the horrors of the Siberian gulags), this is not at all what Uzbekistan looked like even under Soviet rule.

"Yes, it's true that for the most of Russia, during Soviet times, there were a lot of government-built buildings in the form of brutalist architecture which were very depressing looking," Martynovskaya wrote in a later email. "I saw that later in life, and when my family was traveling to Moscow (en route to U.S.), it really stood out for me, the dark and depressing scenery in Russia.

"But in Uzbekistan, even if these buildings existed, there were a lot of other things that were very colorful, and the climate was very similar to central California, where spring and summer were very green, with lots of flowers."

In 1991, the Uzbek Soviet Socialist Republic became the Republic of Uzbekistan. In 1993, the Martynovskaya family emigrated to California.

California: A New Life, A New Kind of Art

"I've never seen an example of an abstract art until I was a teenager living in United States," Martynovskaya said. "Right away, it captivated me, the freedom of using paint in many different ways. I was used to only seeing paint used (...) to display a likeness of something: an object, a figure, landscape. But in U.S., when I went to the art museum for the first time in high school, I was struck by the use of paint, how it was applied: letting the paint take on its own life where it wasn't forced to look like something else."

Instead of careful brushstrokes meant to reflect something else, this kind of art set paint free to be anything it wanted to be: thick or thin, a color not used traditionally, a huge color field or a long jagged drip; painted on with not only brushes but anything that might come to hand.

"I think this was the biggest impact that abstract art had on me. I didn't understand why paintings were made that way but it changed my perception of art forever and I wanted to explore it more."

It's not always easy to train yourself up to be a great artist. The practical aspects of life can get in the way.

"I grew up in a large family; there were six of us. There was no privacy," said Martynovskaya. "But I think that helped me. I would go into a little corner and kind of space everything else out" and be able to focus intensely on her work, she said. "So I think that's helped me. Because I never had my own room; and sharing everything with a lot of people – I think I kind of learned how to, in my head, create a room of my own. So I can work anywhere."

In 2007, Martynovkaya earned a bachelors in studio art and in 2009 an MA in studio art from California State University, Sacramento. She still lives in Sacramento and holds down a "regular" job in addition to creating her artwork.

Art of Opposites, Harmonies at Northwestern

Martyovskaya began her residency at Northwestern on Jan. 13. In her third-floor studio at Northwestern, she's already got a table with several drying small pieces, a few paintings hung on the walls, two larger canvases that are almost finished, and leaning against a wall is a very large wooden framework for another painting yet-to-be-begun.

"I work on a lot of pieces at once for a few weeks, and then they all get completed at once," she said. That's because she applies very thick layers of paint in some areas, and they must dry flat, sometimes for several days, before she can do anything else to it.

Before the paint is applied, though, she puts tape down one side. After applying the paint, "I pull off the tape to get that smooth, sharp edge."

And it's all about the edge.

"I really enjoy when you bring the viewer in and they have to actually come in and inspect it and then they find little things. So, large spaces and small spaces; simplicity next to small complexity. That's what I really like. Edges – certain edges against other edges. It makes a visual thing happen with your eye, like optical illusion kind of thing."

"I usually work very small, but then I've been trying to go bigger, lately, in the last few months. I used to struggle with the larger size because I like having the control over the small space. When you do largescale you can't really do certain things. But you can do other things, and that's what I'm kind of discovering now. I'm really enjoying going large scale."

Martynovskaya draws her inspiration from the world around her. Everywhere she goes, she notices the shapes and lines that make up our environment.

"I think that's what I'm always really looking at: how things are divided. And then how you have a line of one thing like, say, a computer screen that has its own little world inside, and next to it is the line of another world, so everything is kind of separated.

"Even at home, if I'm walking and there's a fence, it's a rectangle that's next to the line of the street, and everything is separated into these sections, and that's what visually inspires me. To try to create something that's different, and something else that's completely different, and putting them together right next to each other, and see how that works."

This intrigues her because people don't see an entire world all of a piece.

"Say somebody's creating a landscape painting. They want to find a nice section, they go and they search for it, they look for angles to create this perfect landscape. But really, when you think about it, while we're existing in the world, we never see things that way. Even if it's a beautiful, very detailed landscape, there's no way for us to see all that. We always have a place of focus, and everything else is out of focus. Like, look over here and you see the door, but (the rest of the room) is out of focus. Right? And then you move over here and focus on a different thing.

"Our life, visually, is more of a collage with all these juxtapositions. So that's how I think about it, and when I'm painting that's what I'm trying to do."

Martynovskaya's work will be on display at the Runnymede and Graceful Arts on the First Friday Artwalk on Feb. 7 from 6 p.m. to 8 p.m. And on Feb. 12 she will conduct an artist talk and workshop that is free and open to all. The talk and workshop will be in Jesse Dunn on the Northwestern campus from 6 to 9 p.m.

More of her work can be viewed at yelenamartynovskaya.com.