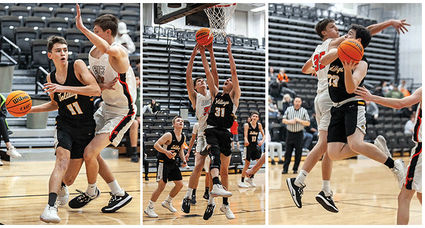 Left: Jackson Feely (11) was able to keep inbounds and get the ball to his teammates, with the Tonkawa defense trying to push him out. Middle: Baylor Rust (31) takes the ball from Tonkawa's defense during a rebound. Right: Kaden Slater (33) flies throught the air, past the Tonkawa defense, to the basket. Alva boys beat Tonkawa Tuesday night 55-36.

The Alva Goldbugs brought home a win from Tonkawa Tuesday night. The Goldbugs and the Buccaneers had similar records going into the game. The Goldbugs started hard and fast, scoring 12 points before Tonkawa could get on the scoreboard and winning the game by 55-36.

At the end of the first quarter, Alva led 15-4. The Goldbugs continued their scoring onslaught with 18 more points in the second period while the Bucs scored six. At the half, Alva led 33-10. Most of Tonkawa's first half points came at the free throw line.

Alva added another 18 points in the third, but Tonkawa started hitting the...