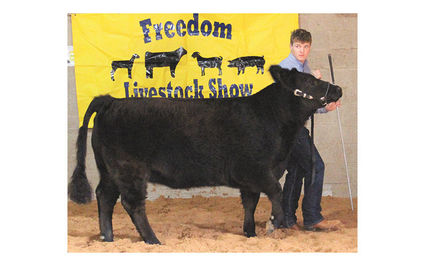 The Freedom FFA Local Stock Show began at 8:30 last Friday morning. About 50 patrons sat in the stands and supported the 4-H and FFA members. A total of 15 members showed gilts, barrows, does, goats, a ewe, lambs, heifers and a steer. Members competed for class winner, champion, reserve champion and showmanship awards. There were over 40 awards given. Top: Their last local show. These three seniors have shown since they were young and naïve, and last Friday they showed for the last time in the Freedom Local Livestock Show. All three FFA members showed with excellence in the Senior Sportsmanship competition. The livestock judge chose Lance Bolar to receive the award. From left: Linsy Weber, Lance Bolar and Summer Ralston. Below, left: Ralston shows her Black Angus heifer, and (right) Weber holds her steer as the judge examines it.