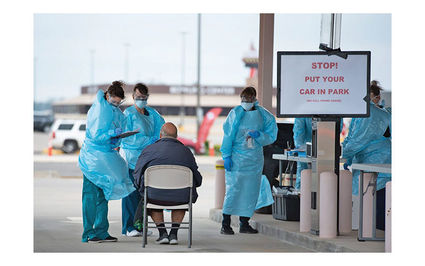 Nurses talk to a man who arrived on foot to a drive-through coronavirus testing site in Shawnee on April 2.

It wasn't the number of patients that worried Dr. Mark Doescher the most as he made his rounds through the University of Oklahoma Medical Center in Oklahoma City last week.

The hospital was emptier than usual. Scores of non-emergency surgeries and treatments had been suspended while health-care workers prepared for Oklahoma's expected peak in COVID-19 hospitalizations later this month.

What concerned Doescher, who practices family medicine, was the types of patients he was seeing. They tended to be older and had "some major things going on," he said. Those included cancer, heart or lung disease, obesity and other underlying conditions that, according to the Centers for Disease Control and Prevention, can heighten the risks of developing a severe illness or dying from COVID-19.

"I am concerned that as we head toward the peak of COVID-19 that we will see some bumps in ICU and ventilator use, and even higher mortality, compared to other states just because our risk profile is so significant for Oklahoma," said Doescher, who is also director of community outreach for the Stephenson Cancer Center, located in the same medical complex.

Oklahoma hasn't been hit as hard by the coronavirus as some other states, such as New York, New Jersey and Michigan. Even its per-capita deaths are lower, though it ranks in the top 20.

But health experts caution that COVID-19's impact on the state could be especially severe because of its well-documented and notorious status as one of the unhealthiest states in the country.

Several recent studies are also sounding the alarm for Oklahoma and other states that have traditionally struggled with poor health outcomes.

A report from the University of Minnesota's State Health Access Data Assistance Center found that 27% of adults in Oklahoma have one or more chronic health conditions that increase the risks of severe disease from COVID-19: cardiovascular disease, including past heart attacks or strokes, diabetes and asthma. That is the eighth highest percentage in the country and higher than the national average of 24%.

Lynn Blewett, director of the data center, said the virus is already exposing health disparities across the country, including new information that black Americans are dying in disproportionate numbers.

She said southern and rural states like Oklahoma that have severe existing health challenges could follow the same trend.

"Now that the virus is moving from the coast towards middle America, where there is a lot of poverty, obesity and lack of access, I think we are going to see a lot of tragedy in those states," she said. "I hope it will be a real wake-up call, but I'm not sure it will be."

For the 23rd consecutive year, Oklahoma in 2019 was ranked among the 10 unhealthiest states in America's Health Rankings, an annual report from the United Health Foundation, a nonprofit organization that ranks states according to health policies and outcomes.

Oklahoma was the fifth unhealthiest state overall and had the second highest cardiovascular death rate, the fourth highest cancer death rate and the 10th highest obesity rate. The state also is one of the 10 highest in smoking and lung cancer rates.

Oklahoma's death rate was also highest in the nation for heart disease and, second highest for chronic lower respiratory disease, according to 2017 data from the CDC.

Its potential vulnerability to COVID-19 is also evident in how the state handles the seasonal flu season. According to CDC data, the state had the 12th highest influenza and pneumonia death rate in 2018.

Couple all of that with having the nation's second highest rate of people lacking health insurance – 14.2% in 2018 – and the conditions are ripe for Oklahoma to struggle in its fight against COVID-19, Blewett said.

The Surgo Foundation, a nonprofit health research organization with offices in London and Washington, D.C., also used health outcomes and other social and economic metrics to rank which states are most vulnerable to the coronavirus.

Dr. George Chrysant, chief scientific officer for the cardiology department at Integris Heart Hospital in Oklahoma City, said these findings aren't a surprise to those who are familiar with what's called the "stroke belt," a region of states across the south and heartland that often includes Oklahoma.

Chrysant and other experts point to various reasons for the poor health outcomes in Oklahoma and similar states: high uninsured rates, especially in states that didn't approve Medicaid expansion; unhealthy lifestyle choices, such as poor eating habits and tobacco use, and high rates of poverty.

"I mean if you just can't flat out afford to eat healthy, then you can't," Chrysant said. "And there is nothing they can do about that than starve, and I can't help with that either because I don't know how to fix that problem."

At Risk in Oklahoma

Of the Oklahomans who have died of the COVID-19, the Oklahoma State Department of Health reports that 67.5% had at least one underlying medical condition, including diabetes, heart or circulatory disease, chronic lung disease, liver disease or renal failure.

Chrysant said many questions persist on how the virus works and why some people develop few or no symptoms while others don't survive even after being put on a ventilator. Other factors also affect the scope and severity of the disease, such as transmission rates, population density and state and local mitigation strategies.

But Chrysant said the data is clear that age and underlying health conditions are two of the biggest factors that predict how someone will fare. More than 80 percent of Oklahomans who have died from the disease were age 65 or over.

"Let's say you come in with heart failure from an underlying condition and it gets worsened by the virus," Chrysant said. "That could be the difference between coming out of it halfway OK and being in cardiogenic shock."

Rebecca Knox, director of respiratory therapy at Rose State College in Midwest City, said COVID-19 patients who had a pre-existing lung condition, such as chronic obstructive pulmonary disease, lung cancer or asthma, may also have a harder time if they develop severe symptoms.

Patients with asthma, for instance, already have chronic inflammation in their lungs that can rapidly worsen because of the virus.

"The coronavirus, and all viruses, have been linked to being a common trigger for asthma," she said. "So anytime you inhale any antigen or allergen, like air pollution or anything, that will cause that response to show a lot more rapidly than someone who doesn't have asthma."

Danger and Decisions Ahead

It's not just those who have COVID-19 that worry Doescher.

He said he is also concerned about the wider fallout of the pandemic, as many people will likely delay or neglect treatment, follow-up visits or exams for chronic conditions. Many of these otherwise routine office visits have been suspended due to fears it could further spread the virus and strain medical resources needed to fight COVID-19.

"There are probably not that many (doctors) who want to do a colonoscopy right now because you don't want to increase respiratory spread from people who have COVID-19," he said. "A lot of that might be okay, but some people undoubtedly might have adverse consequences from that."

Some studies suggest that COVID-19 survivors will have long-term health problems after they have recovered.

These concerns are being stressed by advocates for Medicaid expansion in states like Oklahoma that haven't approved it. They say the move, which would extend health coverage to an estimated 200,000 low-income adults, should happen as soon as possible.

Jesse Cross-Call, senior policy analyst with the Center for Budget and Policy Priorities, a liberal-leaning think tank based in Washington, D.C., said in many cases hospitals or the federal government are covering the testing and initial treatment for COVID-19 patients.

If they recover and have lingering effects – and can't afford to have an underlying condition treated on an ongoing basis – that condition could get worse, he said.

An order from Gov. Kevin Stitt in March underscored the dangers to more medically fragile Oklahomans. He mandated that people with serious underlying conditions shelter in place, although he hasn't issued the same order statewide for the rest of the population.

Stitt announced Wednesday that he is extending that order though May 6.

Health experts said it will be critical for at-risk patients, and those in close contact with them, to practice social distancing, wash their hands and monitor their health.

Despite the concerns for the old and the sick, Chrysant said younger and healthier Oklahomans should not ignore the threat of the virus.

"We are still seeing a lot of people die from this who shouldn't," he said. "And we don't know why that is exactly."