'You can't always get what you want' 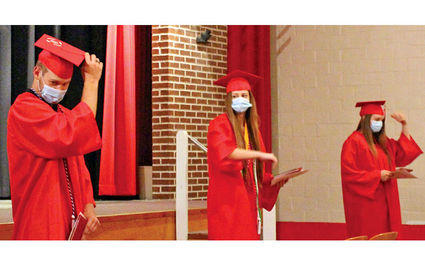 Some communities have done virtual ceremonies and others did parades to honor their 2020 high school seniors. Freedom Public School, having only five graduates, had their ceremony indoors and followed every rule of the state's COVID-19 plan on Saturday, May 16.

While the school's auditorium seats around 300, seniors were only allowed to invite up to 10 family members and friends. Rows were taped off to allow only every other row to be occupied; every fourth seat in the remaining rows was left open for attendees to sit. Those in attendance were met at the entrance of the school and given a mask and instructions to keep it on at all times while in the building. Those who could not attend had the opportunity to watch a live stream on the school's Facebook page.

The ceremony included a short baccalaureate service where Pastor Mark Kinkel of the Freedom Christian Church welcomed those in attendance. Pastor Todd Finley of the Freedom Methodist Church delivered the message.

Pastor Kinkel led a worship song stating that the authors of this song wrote this after feeling anxious and fearful because of things happening in the world. He stated that they wrote this song to show that no matter how bad things are in this world God is in control. In the late '60s, Bill and Gloria Gaither wrote "Because He Lives." Pator Kinkel led those in attendance through the chorus: "Because He lives, I know who holds tomorrow; because He lives, all fear is gone; because I know He holds the future; and life is worth the living, just because He lives."

Pastor Finley then delivered the message that was one of encouragement and included words like humility and kindness. He encouraged the graduates to follow the example set by Christ and be kind to others and be humble. He made a reference to the Rolling Stones' hit "You Can't Always Get What You Want." His themes were hope in an uncertain future and that you are never alone.

Graduation allowed the traditional speeches to be given. Cade Kennedy presented the salutatorian address. He thanked those who made him feel welcomed during his three years at Freedom Schools and wished his fellow classmates success in their future endeavors.

Summer Ralston then delivered her valedictorian address. Her speech was reminiscent of growing up at Freedom Schools and included thanks to everyone who helped her along the way. 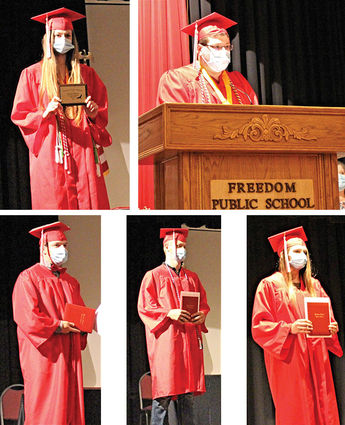 Principal Michelle Shelite spoke of the future plans of the graduates and stated that not all scholarships had been awarded but that the accumulated amount, thus far, was over $100,000.

There was a PowerPoint presentation but no traditional rose ceremony. The PowerPoint included several pictures of each graduate and a list of people to thank.

Superintendent Bryant Weber awarded the diplomas. The graduates walked from their front row seat, up the stairs on to the stage, and picked up their diploma from a table. Superintendent Weber then presented the graduating class of 2020. Graduates are Lance Eric Bolar, Cade Matthew Kennedy, Myles Camden Eugene Nixon, Summer Dawn Ralston and Linsy Jade Weber.

Though there was no shaking of hands or lingering hugs and no reception in the cafeteria, this year's seniors will be remembered and they will remember the feeling of dressing up in a red gown, fitting their cap on their head, turning their tassel, and marching out of the building not as students but graduates and adults.