Why more women than men contract the coronavirus 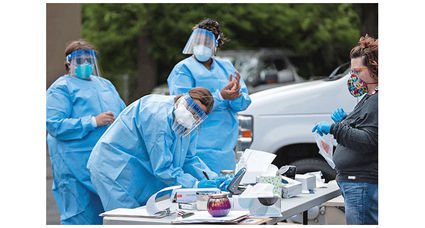 Medical staff prepare to swab another patient being tested for COVID-19 at an Oklahoma City site on May 8. Most of staff working at the site were women.

Women account for about three-fourths of all COVID-19 infections among health-care workers and in nursing homes in Oklahoma, resulting in a higher proportion of women than men overall infected across the state.

The total number of confirmed cases in Oklahoma surpassed 5,500 this week, while the death toll from the virus reached 299. But women, who make up just over half of the state's population, account for nearly 54 percent of the confirmed cases.

That's in line with European infection statistics. The World Health Organization's latest data shows women accounted for 54% of the COVID-19 cases in Europe.

In Oklahoma, the disparity is even starker among health-care workers, where 78% of the infected people are women, according to a recent snapshot from the Oklahoma State Department of Health. Almost 16% of the confirmed cases in the state, or 874 people, have involved health-care workers.

Traditionally, women have accounted for the largest proportion of front-line health care workers in jobs like nursing and medical aides, so it may be unsurprising they have a greater risk of infection from the virus. For example, 91% of the licensed nurses working in Oklahoma last year were female, according to the Oklahoma Board of Nursing.

Women's prevalence on the front lines of the pandemic has helped spur worries about how they are disproportionately affected in different ways, whether through gendered health-care roles, a surge in domestic violence or heavy job losses. More men are dying from COVID-19 in Oklahoma and nationally – a pattern that may be due to underlying conditions or biological factors. More women might have to deal with the long-term negative effects of the virus– effects that are not yet fully understood.

State public health experts are hesitant to draw any preliminary conclusions about gender disparities just two months into the state's response to the COVID-19 pandemic.

"OSDH will probably study some of the factors longitudinally," said Shelley Zumwalt, a spokeswoman for the state health department.

A recent report by the Centers for Disease Control and Prevention found 73% of the infections among health-care workers nationwide were women. The preliminary data covered the early part of the pandemic, from February to April, and likely was an undercount because not all case reports included information about health-care employment.

"The total number of COVID-19 cases among (health care providers) is expected to rise as more U.S. communities experience widespread transmission," the CDC said in the April 17 edition of its morbidity and mortality weekly report.

As of Tuesday, there were 1,190 confirmed COVID-19 cases among residents and staff in nursing homes, or about one-fifth of the state's confirmed cases so far. The health department said women made up 72% of the infections in nursing homes.

Nationally, women make up about 65% of nursing home residents, according to the CDC's National Center for Health Statistics. Women's longer life expectancy in the U.S. could be a factor in that proportion. In 2018, life expectancy was 81.2 years for women and 76.2 years for men.

Zumwalt said because of the way state officials are tracking COVID-19 data, there could be some overlap in the numbers of infected health-care workers with the number of infected employees at nursing homes.