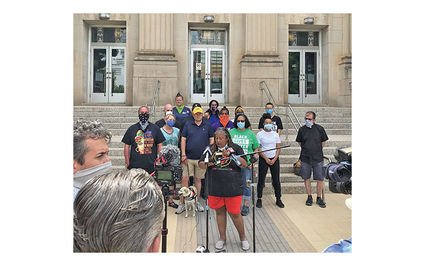 Rev. T. Sheri Dickerson, the executive director of Black Lives Matter OKC, holds a press conference Monday outside the Oklahoma City Municipal Building to go over the group's demands. Among the demands is to create an independent review board for complaints about officers, including ones alleging racial profiling.

As protests over racial policing practices continue to rage across Oklahoma and the nation, a milestone in Oklahoma's racial history will quietly pass later this week.

Friday, June 5, will mark the 20th anniversary of the passage of a state law that for the first time explicitly banned racial profiling by law enforcement agencies. The law made it a misdemeanor crime for officers to stop, detain or arrest someone based on their race or ethnicity.

Shortly after the bill was signed into law in June 2000, Maxine Horner, a state senator at the time who authored the legislation, called it "long overdue" and said she hoped "law enforcement officers who routinely utilize racial profiling in their work will think twice before making unfounded assumptions."

But there's little evidence that the law has brought any teeth to the ban against racial profiling.

A 2018 Oklahoma Watch investigation found that every complaint submitted to the state attorney general's office or the now-shuttered Oklahoma Human Rights Commission over the past decade was dismissed. The reason often given is lack of proof.

Two years later, as nationwide protests over racial unrest and police brutality have put policing practices back in a spotlight, the picture hasn't changed.

State documents show that 2018 and 2019 produced some of the highest number of complaints the state has seen since the law was approved. Last year a record 21 complaints were submitted, alleging instances of profiling by 19 state or local law enforcement agencies.

None of the complaints was substantiated by the law enforcement agencies, which are charged with investigating their own officers.

But is the absence of substantiated complaints an indication of success?

Police departments say they have boosted training and have policies to prevent racial profiling. Police chiefs and other law enforcement leaders have increased efforts to communicate regularly with minority-community leaders and listen and respond to concerns.

But several black leaders said the numbers don't reflect what is happening in minority communities and are proof that the state law has been a failure.

"Zero substantiated complaints? Wow, that is just comical," said state Rep. Ajay Pittman, D-Oklahoma City, a black lawmaker who said she knows numerous people, including herself, who feel they were subjected to racial profiling. "We have to come to the realization that we can't keep sugar-coating what has been going on, since as long as do, we are just perpetuating the problem."

it is difficult to measure the exact extent of racial profiling in Oklahoma.

Unlike many other states, Oklahoma does not require police to collect and publish statistics on race for traffic stops and searches. That data can be analyzed for patterns that indicate possible racial profiling.

But the 2000 law, which also required the state to publicly release annual reports on racial profiling complaints, offers a glimpse into what is occurring.

The annual reports, reviewed by Oklahoma Watch, show at least 85 racial profiling complaints have been filed since 2008. All were returned with a "no cause" finding, with the exception of four pending cases and one that was referred to the FBI in 2013.

The annual profiling reports, however, likely provide an incomplete picture of complaints.

The numbers in the annual reports include only complaints that are submitted to the attorney general's Office of Civil Rights Enforcement. Once the office receives those complaints, it forwards them to the law enforcement agency in question for that agency to investigate the complaint. State law then requires the agency to report its findings back to the attorney general's office for inclusion in the annual report. Details of the case do not have to be reported.

The public can also file complaints directly to law enforcement agencies. The only way to find out about those incidents is to request information from hundreds of police departments and sheriffs' offices – and even then, many of the records could be kept confidential.

It is also difficult, and often impossible, to find details of the complaints and subsequent investigations for cases. That's because police departments routinely assert that any reports that don't result in disciplinary action are exempt from public records requests.

Another challenge in getting a fuller picture, African-American leaders say, is that many who believe they were racially profiled will not take the extra step of filing an official complaint. Some don't trust the process or don't think it will make any difference, leaders say.

Alex Gerszewski, communications director for the attorney general's office, said the annual racial profiling reports are "an accurate reflection of what is reported to our office." But he didn't say whether Attorney General Mike Hunter or his office believes the data is representative of the experiences of the state's black and other minority communities.

Spokespeople for the Oklahoma City and Tulsa police departments also declined to comment at length.

But in 2018, Tulsa Police spokesman Sgt. Shane Tuell told Oklahoma Watch that training and the use of body cameras have worked in recent years to curb racial profiling.

"I personally don't see (racial profiling) as a problem, but I guess it depends on who you ask," he said. "I think we've been very progressive as a department and we offer people multiple ways to make a complaint ... and each one of them is investigated thoroughly."

The Oklahoma City Police Department also has stressed that it now incorporates implicit bias workshops in its training programs. Oklahoma City and Tulsa police departments say they have no conflict of interest investigating complaints because, unlike with smaller agencies, they have internal affairs divisions.

Rev. Sheri Dickerson, executive director of Black Lives Matter OKC, said racial profiling is something she and many other minorities experience on a regular basis.

"The color of our skin (affects how others perceive) us in every aspect of our life, including this," she said.

Pittman said one of most extreme cases came in 2015 or 2016, when her mother, former state Sen. Anastasia Pittman, was driving them home after an emergency room visit to the University of Oklahoma Medical Center.

Pittman said her mother dropped something, causing her to accelerate quickly, which caught the attention of an OU Health Sciences Center police officer, who pulled them over near North Lincoln Boulevard.

When the officer approached, he suddenly became "irate" and "disrespectful" – a change that she believes was because of their race. The confrontation ended after a supervisor was called, but Pittman said she was shaken by the experience.

"If we are experiencing this as elected officials, in our community, our district even, then I can't even imagine what is going on throughout the state," she said.

Sen. Kevin Matthews, D-Tulsa, the Legislature's longest serving black lawmaker, said he, too, thinks he experienced racial profiling before taking office. He said he was pulled over, handcuffed and detained for a minor offense when he was working with Tulsa Fire Department.

Matthews said racial profiling is hard to prove, but when it's a life and death matter, there needs to be more accountability.

"We don't just want the right to make a report – that won't bring someone back alive," he said. "We want justice, we want consequences when these things happen."

On Monday, Dickerson and other Black Lives Matter organizers gathered outside the Oklahoma City Municipal Building to read off a list of demands related to the protests and proposed police reforms.

Among them was a call for creation of an independent citizens' board for the Oklahoma City Police Department to review excessive force and racial profiling complaints.

Dickerson said this is critical to making progress, as she and others have lost faith in the practice of police departments investigating their own officers. Police and police unions, however, have historically resisted outside oversight.

Dozens of officers joined the Oklahoma City Fraternal Order of Police during a press conference Tuesday to push back against many Black Lives Matter demands, including a call for Oklahoma City's Police Chief Wade Gourley to step down.

Mark Nelson, vice president of the group, didn't address racial profiling or the independent review board. But he said police are "not here to impose a will that is against a law or policy."

Sen. George Young, D-Oklahoma City, who is also black, said he wants a statewide change to how racial profiling complaints are addressed.

Young said after he saw the latest racial profiling annual report earlier this year, he called the attorney general's office to question its accuracy and see if there was a better way to determine what was happening.

Young said he is now looking at legislation for next session to address some of these issues, including requiring independent review boards to examine the complaints.

"If we keep saying there is no racial profiling, you start believing it," he said. "But the fact is I'm black, I've been black all my life and you cannot tell me that when I drive though Oklahoma City – inside or outside my district – that I don't draw some attention. It does occur."