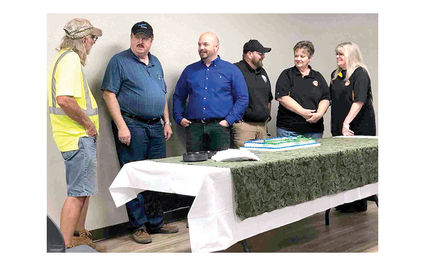 At the June meeting of Kiowa's City Council, outgoing City Administrator Rusty Varnado expressed his appreciation to the council "for allowing me to serve Kiowa."

After a military career in the U.S. Army, Varnado started as administrator in Kiowa last October. He's leaving Kiowa as he got a job offer at Ellsworth as city administrator and that's much closer to his home in Junction City where his family resides.

Varnado told the council, "People ask me what I'm most proud of. We accomplished a lot in a short period of time. I'm really grateful for the opportunity."

He listed the newly remodeled city hall, and said some of "the old stuff is coming down" such as the old electric building being torn down, the former police building ready to be sold, and the swimming pool being sandblasted, totally redone and opened to the public.

"I'm really proud of Travis (Peterson) and how he's tackled the police chief job. The two ladies (Trish Brewer and Lynette Callison) in the office don't get enough credit for what they do. I ask a lot of them and they charge straight ahead." Laughing, he said, "I put the ladies through hell, bless their hearts. They endured several months of pretty tough livin' with the transition into this (newly remodeled) building." 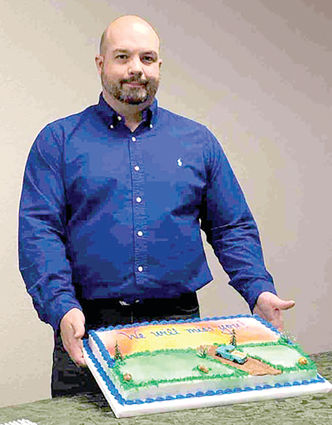 Outgoing Kiowa City Administrator Rusty Varnado shows off the cake staff had for him at a reception as he leaves to take a new job.

Varnado said, "The water project (major line replacement) is finally getting off the ground." The city awaits the KDHE to approve the plans and easements. "Hopefully you'll get the rate structure worked out. The price (of water) has to rise hopefully in increments.

"I'm really thrilled with the manner in which the council handled themselves and their reaction to AAHN's Place. The extraordinary effort to block them is disappointing. You really set aside your personal views to do what was right to take care of the citizens and keep the honor and integrity of your office."

The council "reluctantly" accepted Varnado's letter of resignation with a vote of 5-0.

He started his new job in Ellsworth Monday.