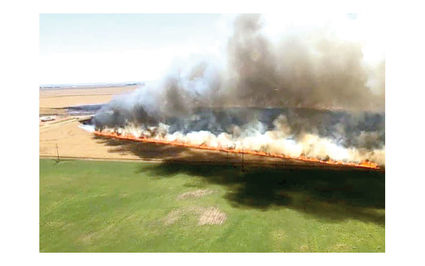 This spectacular blaze of a wheat field fire northeast of Burlington is captured by Kiowa man Buddy Liggenstoffer from his helicopter.

Saturday afternoon about 3:30 p.m., Burlington's Fire Department received a call about a wheat field fire at County Road 600 and Osage Road. That location is two miles east and six miles north of Burlington. It's one mile south of the Kansas state line.

Burlington Fire Chief Aaron Smith said a bearing on a combine went out and caught fire igniting the wheat field fire. Smith said the fire started on Rick Schrock's field and jumped across the road from the south into another of Schrock's fields.

Besides Burlington, firefighters from Amorita-Byron Fire and Rescue responded as did Capron and Cherokee. They extinguished the fire as it got into some grass at the Schupbach Ranch and stopped the flames before they burned their soybeans.