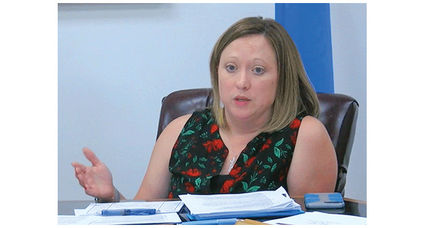 The action followed a nationwide search that was narrowed down to ten candidates. Those applicants were studied in depth by a committee consisting of council members, city employees and members of the community. During several special executive session meetings, council members discussed the candidates and decided to whom they would make an offer.

A smiling Dr. Bo Hannaford made the motion to hire Brady, seconded by Mary Hamilton. All council members were present and voted unanimous approval.

Brady has served as interim city business manager since the resignation of Joe Don Dunham effective Feb. 29. She was appointed in a special council meeting on Jan. 27 and had about a month of training time with him. Before that she had worked as his executive assistant. With planning for the FY20-21 budget getting underway, the council appreciated that Brady had previous experience with the budget process and other aspects of local city administration.

The city council has had ample opportunity to observe Brady's ability to handle the reins of the city. Since the audit of FY18-19 showed the city needed to make up a shortage of money in the general fund that was covered by borrowing from other accounts, she has worked to pull together a very conservative budget to put the city on a financially sound basis.

Brady and her husband live in rural Woods County with their young children.

At the beginning of the council meeting Monday while she still wore the interim title, Brady presented a report on city business. She said the council will likely be seeing a change order from Beytco, the company handling the west water tower and booster pump project. The work was supposed to be completed by June 8. However, COVID-19 caused delays in getting parts. Provided parts come in, the project should be wrapped up in the next couple of weeks.

Brady said she and EMS Director Julie Dennis have met with Waynoka Mayor Susan Bradford and the Freedom EMS director about forming a 522 board for Woods County. A 522 district would place the participating emergency services under a board and would provide tax support to help those services. Another meeting is planned in about a week. It is possible the 522 district will be on the November ballot.

Dennis has put together a request for proposals (RFP) for ambulance management companies. The council approved a motion on this at the last meeting with Dennis giving input on the terms. The RFP has been forwarded to the city attorney for his approval.

Dennis and Assistant EMS Director Bridgett Gragg have been researching companies who do billing for EMS services. Brady said they'll be getting together with the council's Public Safety Committee next week to talk about the 522 board, the RFP and billing companies.

When the city offices closed in response to COVID-19 restrictions, it was announced that water service cutoffs would be suspended. Brady said the water department will now start doing disconnects. City staff will be contacting those who have higher balances and have not been able to pay their water bills. They will work with customers to set up payment arrangements so service may continue. Brady encouraged those with balances to call City Hall to set up payments.

On June 8, an initiative petition was filed seeking to eliminate the sales tax (1.25 percent) that has been designated for Alva's Share Medical Center. A legal notice concerning this petition was published in the Alva Review-Courier on Sunday, June 14. There is a ten day period during which citizens may file protests. Currently the city clerk is validating the petition to determine everything is in order. If it is found to be valid, the matter will be on the November election ballot.

Hannaford reported on two recent meetings of the finance committee. The committee met with representation from all the banks to find out what information was needed to apply for a line of credit. He said questions were asked on both sides.

Sales and use tax was down slightly compared to last year. The city collected about $338,000, down about six percent. Hannaford noted this was for March business when the state was getting into the first month of COVID-19 restrictions. Utility billing (water, garbage and sewer) was up $32,000 from last year.

A video of the complete city council meeting may be viewed at AlvaReviewCourier.com.