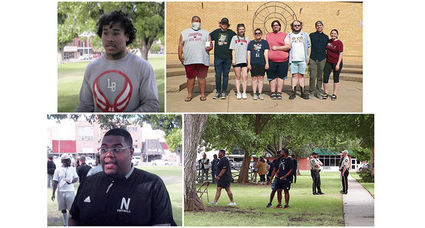 Top Left: Alejandro Aaron, a senior and football player at Northwestern, paused to share his thoughts at the rally on the courthouse lawn Tuesday, July 16. "It just feels good knowing that people are around willing to help and that not everybody's bad. That there's family even though we're not family." Top Right: The rally was organized by a group of Northwestern students. From left: Darian Smith, Anthony Marr, April Schultz, Bella Hardester, Jacob Marr, Peyton Lucas, Austin Mount, Kasey Collins. Bottom Left: "It's serious out here for us," says Demetri Wilson at the rally on the courthouse lawn June 16. Bottom Right: A crowd of as many as 50 people of various racial or ethnic backgrounds gathered on the courthouse lawn Tuesday, June 16, to express support for minorities and the entire community.

In the death of George Floyd – and the release of the video showing a police officer kneeling on his neck until he died – the impact seemed to reach every corner of the nation.

It impacted students at Northwestern Oklahoma State University, too. They wanted to do something, make it better. They wound up organizing a rally on the courthouse lawn on Tuesday, June 16.

It had little in common with the protests and rallies going on in other parts of the country.

This rally was an Alva-style rally.