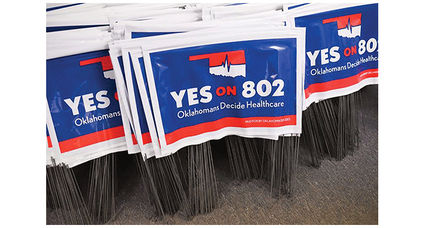 Lawn signs promoting State Question 802, shown here in this file photo, were part of a successful campaign to expand Medicaid in Oklahoma.

After years of debate and aborted legislative proposals, voters have done what Oklahoma lawmakers have long resisted.

With a razor-thin 50.5% of the vote, Oklahomans approved a state question Tuesday to expand the state's Medicaid program and extend health coverage to an estimated 215,000 low-income adults.

Tuesday's vote capped off a long-running and high-stakes dispute in the State Capitol over whether Oklahoma should join the 36 other states that have accepted the expansion, a key part of former President Barack Obama's Affordable Care Act that the U.S. Supreme Court ruled in 2012 state...