How Oklahoma voted on Medicaid expansion 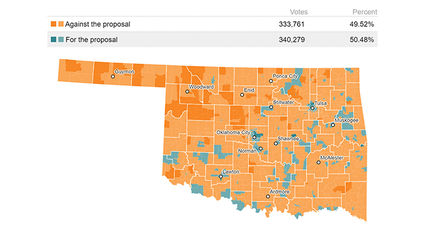 Only seven of Oklahoma's 70 counties voted for Medicaid Expansion.

In the end, the narrow passage of State Question 802 to expand Medicaid in Oklahoma came down to a lopsided arithmetic: Only seven counties voted in favor of the proposal, and 70 counties voted against.

But four of those counties are among the five most populous in the state, reflecting a general urban-rural divide in the voting results. However, several other traits differentiate some of those seven counties, suggesting that other possible cultural, political and economic factors influenced the vote. And within many counties were precincts that defied their county's overall vote.