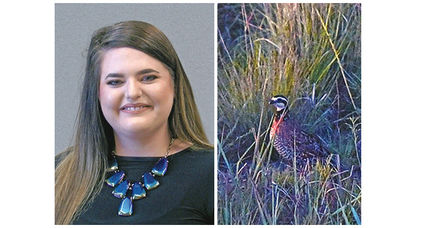 Although her parents disagreed with her choice of majors, Allyson Bush persisted, earning a studio art degree from Oklahoma State University in 2012. The Mangum native then had to figure out how to use that degree in a world that was in an economic recession.

Bush became interested in photography in a thoroughly modern way, through the iPhone. The first iPhone was launched while she was a senior in high school. Although she didn't own one, "it really just inspired me to want to get to know the digital version that our life was going to become.

"I begged my parents as I was a freshman in college and received my first iPhone and my first Nikon camera," she said. The camera was useful with her art classes. Bush would do photo shoots and then translate those ideas into watercolors or acrylic paintings.

"I got asked to shoot somebody's wedding one summer when I was in college, and that started my seven year business of a wedding photographer," she said. That business and a job in a Stillwater boutique paid her way through college.

"I always tell people who are graduating or looking to do an arts degree that they should start off marketing and working within their network in college," Bush said. What happens may be "your artistic way of using a degree. It might start off with a wedding."

By the time she graduated from OSU, Bush had shot over 50 weddings. She continued to work full time at the boutique during the week and spent her weekends traveling to weddings. "That was when Pinterest became a large part of wedding planning and the arts and crafts world," she said. "Etsy had just become a fundamental way for artists to get their work out to the world to sell on a very reasonable platform.

"I think that's what inspired me – this abundance of knowledge of photography, especially in the world of weddings where you're asked to do very particular shots but also given a lot of freedom under a lot of high pressure."

Bush says wedding photography isn't for everyone. "You're going to love wedding photography or you're never going to want to do another wedding," she explained. "I love the high pressure and the traveling and getting to meet groups of new people and experiencing different cultures and lifestyles. You get to learn a lot at weddings about people, and they give a lot of interesting speeches that tell a lot of history about their family."

In a life filled with work, the boutique during the week and weddings on weekends, Bush had little time for dating. Then she met Brodie Bush, her future husband. That brought her to Alva where she continued her wedding photography while working in a local dental office. She was "trying to figure out where my spot in Alva was."

She decided to purchase a local boutique, The Daisy Village, that had been in business here for 50 years. Now she uses her art degree almost every day. She's taking photos of merchandise with her iPhone, making it easy to post on social media. Her art degree is evident in her store displays and marketing on Instagram and Facebook. When asked how she uses her degree, she points to her store windows and beautifully decorated Christmas trees. She's very glad she stuck it out in an art major although she says, "It took a lot of hustle."

This month, Bush's photographs are part of the featured exhibit at Graceful Arts Gallery in Alva. The photos on display highlight the rural way of life from a combine outlined against the sunset to a shy quail hiding in tall grasses. As the wife of a Woods County farmer-rancher, Bush says, "We're constantly in the fields."

You can see more of Bush's photography on her business website at ShopDaisyVillage.com where her prints are available. You can also look her up as The Daisy Village on Facebook, Instagram and TikTok.

"It's pretty rugged out there, and there's a lot of history in the land," Bush says of the ranch. "I found myself obsessed with the sunsets in the area and all the wild flowers. I've traveled all over, coast to coast, and when you come back to Oklahoma, especially Alva, and you look at the sunset ... there's not a sunset quite like the one in Alva when you can see the full sky."

Her life is all about looking well-groomed and promoting her store during the day with a shift to farm life in the evenings. "I say I'm a boutique owner in the day, and I'm a cowgirl in the evening because I put on my muck boots and go out into the brush," she said.

"It's a mixture of two different lifestyles. Somewhere in the middle they meet and form the photographs I create."