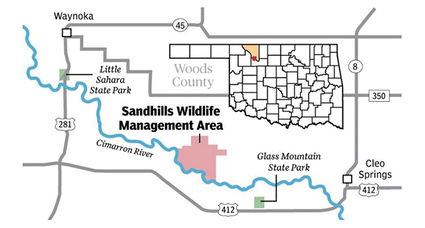 The Oklahoma Department of Wildlife Conservation soon will be adding another wildlife management area.

The 5,212-acre Sandhills Wildlife Management Area in Woods County should be open in time for the fall hunting seasons, said Bill Dinkines, head of the wildlife division for the state agency.

The Wildlife Department bought three adjoining properties in Woods County to create the Sandhills WMA. Emergency rules for the new public hunting area were passed by wildlife commissioners at their June meeting.

Gov. Kevin Stitt must approve the new rules before the Sandhills WMA can open. The governor has 45 days from when the emergency rules were passed by the commission to sign them.

"It really is a good piece of property," Dinkines said. "The south boundary of the property is the Cimarron River. The day I was out there before we actually closed on it (in March), we pulled up there and heard quail whistling. On a tour, we saw wild turkey. We saw deer. It is a wildlife-rich environment."

The exception would be the deer gun season. Deer gun hunts on the Sandhills WMA would be allowed only through the Wildlife Department's controlled hunts. Archery deer season and muzzleloader deer season would be the same as the statewide season.

Quail hunting would be closed on the Sandhills WMA for the first nine days of the deer gun season for the controlled hunts.

Choosing the name for the new WMA was easy, Dinkines said.

"A very distinct feature when you set foot on the property is the rolling sandhills," he said.

Anyone with a valid state hunting and fishing license will be able to access the Sandhills WMA. Others wishing to access the WMA can buy a Wildlife Conservation Passport from the Wildlife Department.