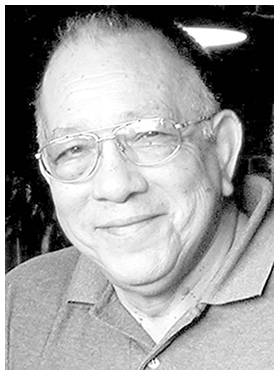 Augustine was born on August 28, 1934, to Bartolo and Juana (Martinez) Ledesma in Avard, Oklahoma. He passed away on Friday, July 10, 2020, at Harry Hynes Memorial Hospice, Wichita, Kansas, at the age of 85.

Augie grew up in Avard and Alva and graduated from Alva High School in 1952. He was proud to be an Alva Goldbug. After graduation, Augie attended Northwestern Oklahoma State University and graduated in 1956 with a BS degree in secondary education/physical education. He also played baseball while in college and was a member of the "N" Lettermen's Club.

Augie married Iva LaJune Murrow on February 2, 1957, in Clayton, New Mexico. Following their marriage they made their home in Jefferson, Oklahoma, and then Lovewell, Kansas, before returning to Alva in 1958. To their marriage four children were born: Elena, Charmaine, Michael and Teresa.

Augie's teaching and coaching career took him to Maize, Wichita, Little River, Belle Plaine and Conway Springs, all in Kansas, where he retired after 43 years of teaching and coaching football, boys and girls basketball, and boys and girls track. He was fondly called "Coach Dad" by his girls teams because when he coached his daughters they heard them yell "Dad" and the others adopted the endearment. He coached all of his kids in various sports.

Augie loved baseball, in which he coached his son in summer leagues, and was a die-hard NY Yankees fan, through thick and thin. His football passion was with the OU Sooners and watched them whenever they were on TV.

Augie also had a fondness for monkeys; his kids don't know why, but he loved getting monkey/chimp gifts and even had two statues of them on each side of his porch to welcome visitors. He kept current on world affairs and loved to do crossword puzzles. He eventually moved to Haysville, Kansas, where he resided to be closer to his dialysis treatments.

Augie is survived by his four children: Teresa Wessels (of Colby, Kansas), Michael and Tracy Ledesma (of Berryville, Arkansas), Charmaine and Scott Rathgeber (of Kiowa, Kansas) and Elena and Glenn Hayes (of Guthrie, Oklahoma); five grandchildren: Shandi Roesener and husband Colton, Alex Ledesma, Kentra Staats and husband Colby, and Michael and Whitney Hayes; four great-grandchildren: Henley and Tristan Roesener and Easton and Kyler Staats; as well as nieces, nephews, other relatives and friends.

He was preceded in death by his wife, LaJune; his parents; his brothers Frank and Sam Ledesma; his sisters Julia Arredondo, Juanita Starks and Mary (Martinez) Hemmingway and their spouses; son-in-law Ado Wessels; and a grandson, Matthew Ledesma.

Private/family graveside services will be held at the Alva Municipal Cemetery with Father Bala Sagili, pastor, Sacred Heart Catholic Church officiating. Online condolences may be made at http://www.whartonfuneralchapel.com.

In lieu of flowers the family request memorial donations be made to: The Kansas Dialysis Association, PO Box 47095, Wichita, KS 67201 or Harry Hynes Memorial Hospice, 313 S Market, Wichita, KS 67202 or at their website: http://www.Hynesmemorial.org.