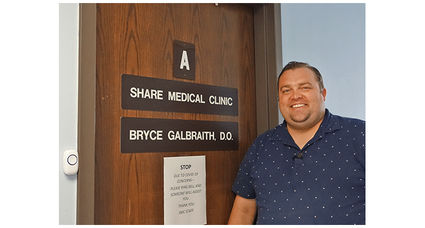 "Call me Doctor G," says Bryce Galbraith, D.O. He stands by the door to his office suite in the Professioanl Buidling on 4th Street in Alva. A doorbell to the left summons a nurse to take your temperature before you enter.

New medical doctor Bryce Galbraith, D.O. has opened his office in Alva. Normally, this occasion would call for a reception to help him become acquainted with the community, but concern about coronavirus canceled those plans.

Instead, he's moved directly into seeing patients. His office is located in the Professional Building, Suite A. That's on 4th Street right across from City Hall downtown. Hours are 7:30 a.m. to 5:30 p.m. Monday through Thursday. Appointments may be booked by calling 580-430-3333.

Born in Westminister, Colorado, a Denver suburb, Galbraith spent his early years in the greater Denver area other than a couple of stints in Kansas City and Salina, Kansas. His father was a door to door vacuum cleaner salesman so the family went wherever there was an opportunity.

During his junior high and high school years, Galbraith lived in Utah. After graduating high school, he went on a two-year mission to Brazil for the Church of Jesus Christ of Latter-day Saints. About two months after his return, he married his high school sweetheart. He and Syrie (sounds like the iPhone but spelled differently) have been married 15 years. They have two children, a son age 10 and a daughter age 4.

For about five years, Galbraith followed his father into the vacuum cleaner sales business. Deciding he didn't want to do that for the rest of his life, he enrolled at Weaver State University in Ogden, Utah, where he graduated with a degree in zoology. The university didn't offer the usual biology major.

He was accepted into medical school in Las Vegas, Nevada. From there he went for a residency in family medicine to Westminister, Colorado, in the same hospital where he was born. As his three-year residency was coming to an end, he was looking for opportunities around the country. He received an email about Alva.

After a visit and interview, he and his wife decided Alva was right for them. "We were super excited about it," he said. "I've always wanted to deal with the full spectrum." In his family practice specialty, he's ready to treat all ages "from the cradle to the grave and anything in between."

In addition, Galbraith has been trained in obstetrics and has delivered a lot of babies although he won't be doing that here. "I have done a lot of training with pediatrics as well so I'm very comfortable with kids and look forward to treating them," he said.

While Galbraith sees his move to Alva as "a great opportunity for me," he believes he has a lot to offer the community as well. As a doctor of osteopathy (DO), he does a lot of what's called OMT (osteopathic manipulative treatment). He describes it as kind of a mix of chiropractic, physical therapy and massage therapy.

"As a DO, we spend 500 extra hours in med school learning hands-on techniques to try and help the body heal itself," he said. "I spent extra rotations and through residency, I would see two to three patients a day when I was in clinic doing OMT. So I feel pretty good and pretty versed in helping treat a lot of pain, whether it's low back pain, headaches, back pain in general, hip pain, things like that."

He says OMT is "an alternative to just giving pain meds and waiting for things to get better. It's a way to help people heal themselves faster." He said OMT doesn't replace chiropractors and other therapists. "I think they both help each other out."

Galbraith is also well versed in sports medicine. He went down that route first and has a lot of extra training in it. However, he found stiff competition for a limited number of openings in that specialty. His extra training in that area has made him comfortable with giving injections to alleviate sports-related injuries.