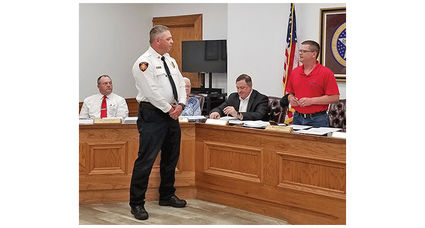 After beginning his Alva career in firefighting 15 years ago, Bryan Miller has reached the top position in the department. Monday night, he recited the oath of office, administered by Mayor Kelly Parker, to become the Alva Fire Chief.

Mayor Parker read some history from Miller's career, put together by city staff. In 1999 Miller attended OSU-OKC and majored in fire protection safety and technologies. Miller started his emergency services career in 2001 with the Alva Police Department as a patrolman. He left Alva in 2003 and became a detective in Kansas.