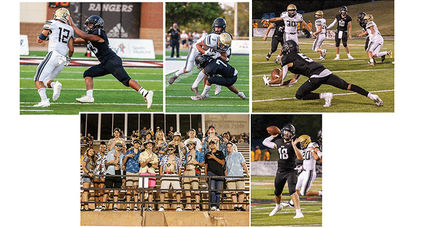 Top Row (left to right): Christopher Carpenter (23) takes down the Kingfisher running back during Friday's game; Daylon Malone (7) and Nathen Hunt (22) try to take down the Kingfisher running back; Gavin Perez (5) dives for the ball during Friday's game against Kingfisher. Bottom Row (L-R): Alva's student section was full with students "dressed for success" during the first home game Friday night; Quarterback Kaden Slater rears back and throws the ball.

The Goldbugs won the toss and deferred possession. After a Samuel Houston kick, the Yellowjackets advanced from their 29 yard line to the 42 where sophomore quarterback Jax Sternberger'...