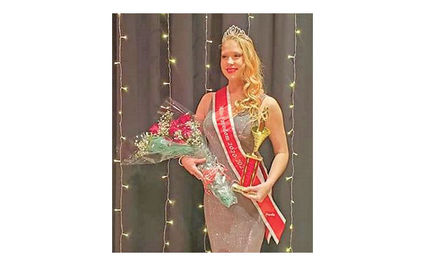 And Miss Freedom 2020 is ... TamLynn Link! At the Miss Freedom Pageant on Saturday, Link won the talent and interview portions of the contest, each worth 30 percent of the overall score. She sang "Amazing Grace" to the tune of "House of the Rising Sun."

Link will go on to compete at the NWOSU Miss Cinderella Pageant, which has been postponed due to COVID-19 concerns.

Madison Rhodes was named first runner-up and received a trophy and bouquet of flowers. Her talent was tap dancing to the lively song "Uptown Funk." Madison Rhodes won the Crowd-Pleaser Award and the evening gown competition.

The judges were Shawna Burgess and Rachel Stephenson-Spellman, who have several years of experience in pageantry. Burgess is a certified Miss America judge who began competing in pageants at the age of 10. She won Miss Shattuck in 1994-95 and went on to compete in the Miss Cinderella pageant, making the Top 5 in talent. She has judged numerous competitions, including Miss Oklahoma preliminaries.

Spellman was Miss Alva in 1987, served two years as co-director of Miss Cinderella pageant and became a certified pageant judge in the Miss Oklahoma pageant system.

Nicole Hughes emceed the evening with wit and grace. She was the 2017-18 Miss Freedom. She also performed a monologue, "Almost Sixteen," that brought amusement and laughter to the audience.

Other entertainment included Freedom students Jaci Weber, who delivered a wonderful rendition of "I Can't Help Falling in Love with You;" Shay Wilson (seventh grader), who selected the piece "Hallelujah" to play on the piano; and her sister, Reagan Wilson (fourth grader), sang "This Is Me." 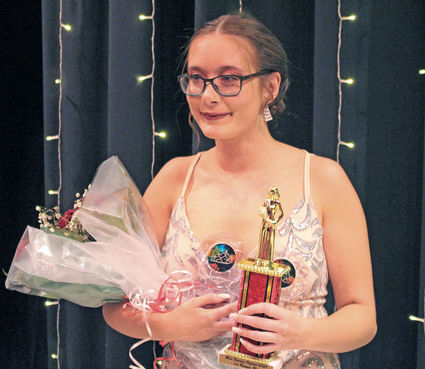 Madison Rhodes receives the first runner-up trophy with a bouquet of flowers.

Other talent included Miss Mooreland Addie Stinnett, who clogged along to the Elvis tune "All Shook Up," getting everyone toe-tapping along. In addition, Miss Buffalo Bianca Nunez sang a beautiful tune, "Butterfly Fly Away," with her father accompanying her on the guitar.

Darci Immell, the pageant director and teacher at Freedom schools, thought that this year was a very close competition. "I am so proud of these girls (TamLynn and Madison). The competition was so close and they both worked so hard," Immell said. "I know the judges must have had a tough time picking just one."

"I also want to thank the junior girls and Shay and Reagan for helping as the stage crew and performing," Immell said. "They were reliable and helpful and made my job easier."