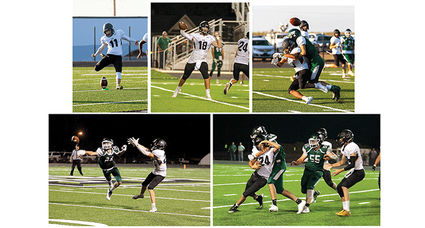 Top Row (Left to Right): Samuel Houston keeps his eye on the ball during kickoff; Alva's quarterback, Kaden Slater, throws the ball down to his reciever; Alva's Gavin Perez gets taken down after he caught the ball and lost possession on the way down. Bottom Row (L-R): Thomas' Jaxen Mannering (24) knocks away the pass intended for Alva's Nathen Hunt (22); Alva's Keaton Lewis (24) gets taken down by Thomas' Davyn Stewart (58) during Friday night's game.

Despite getting on the scoreboard first, the Alva Goldbugs lost in a road game at Thomas-Fay-Custer, 47-26 Friday night. Under longtime coach Bob Ward, the Thomas Terriers are usually a contender for state in the Class A football playoffs.

Early non-district games provide a look at strengths and weaknesses of teams. Coach Mike Shklar and his assistants will no doubt be working on turnovers with the Goldbugs who had too many in Friday's contest. Several of those led directly to scores for the Terriers.

Thomas led 19-12 at the end of the first quarter, and Alva was held scoreless in the seco...