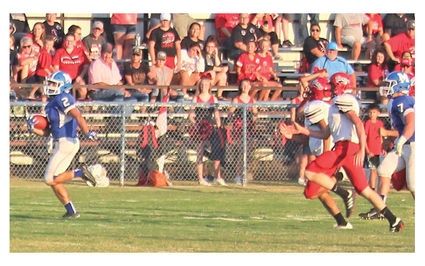 Theo Sutton (No. 2) sprints down the sideline for 75 yards at the end of the first quarter.

Mooreland Bearcats took on the Pawnee Black Bears Friday and lost 14 to 38. Both teams showed up ready to play. The Cats kicked the ball to the Bears first and because of a penalty the Bears started deep in the Cats' territory.

About mid-field the Bears turned the ball over on downs and Mooreland had a turn to score, but on fourth down the Cats gave up the ball to the Bears. The Bears pushed the ball down field by keeping to the running game. With 38 seconds left in the first quarter the Bears scored 6 on a running play, and added two more for the extra points. 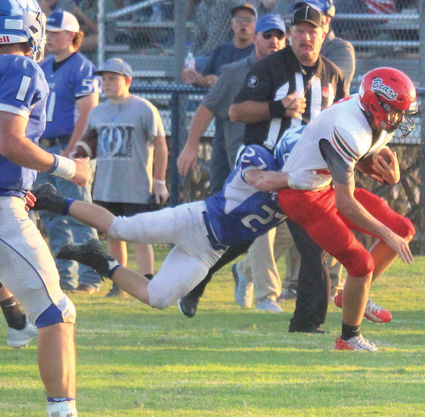 The Cats received the kick, and Theo Sutton (No. 2) ran down the sideline 75 yards, setting up Mooreland at their four-yard line. On the first plays of the second quarter the Cats scored 6 with a quarterback keeper into the end zone.

The Bears scored two more times in the second period and at half-time the score read Mooreland 6 – Pawnee 22.

The Bears stayed focused and scored 16 more points while the Cats scored one more time late in the fourth. They were able to score a touchdown and two extra points. The final score was Mooreland 14 and Pawnee 38.