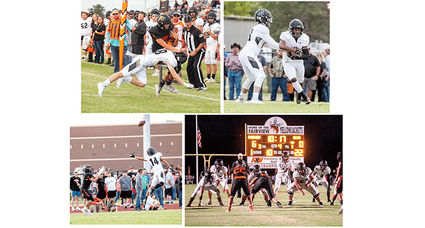 Top Row (Left to Right): Drew Glass (8) takes out the Fairview running back; Quarterback Kaden Slater hands off to Drake Wharton after the snap. Bottom Row: Zayin Tiger (14) tries to deflect the pass to the Fairview reciever; Alva's Baylor Wren (52) snaps the ball to quarterback Kaden Slater (18) with the offensive line ready to push through. Alva pulled off the win in the fourth quarter 14-6.

Having opened their season with two losses, the Alva Goldbugs were determined to bring home a road win against the Fairview Yellowjackets Friday night. The longtime rivals seemed evenly matched as the game began with Fairview scoring the lone touchdown of the first half. The Goldbugs kept fighting to the finish, holding the Jackets scoreless and delivering two touchdowns in the fourth quarter for a 14-6 victory. The win spoiled Fairview's homecoming, but the Goldbugs can now take a 1-2 record into district play on Sept. 25.