All-American parties and congrats for Evie Watson as she becomes U.S. citizen 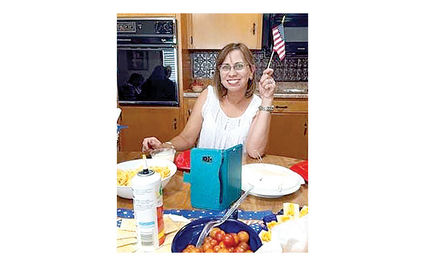 Evie Watson just became a U.S. citizen and her friends threw a little All-American party for her.

This story all began with a young American soldier in the U.S. Navy who was stationed in the Philippines during wars in Korea and Vietnam and met a young woman while there. From that relationship Evelyn was born who goes by "Evie" now. Raised in the Philippines by her mother, Evie said, "I wrote letters to my dad until I was 18 years old. I never heard from him and never knew the reason. I still hope."

Forward to the present, Evie is a resident of Kiowa, Kansas, and is actually the first lady of the small town of about 900 people as she is married to Mayor Bill Watson, owner of Insurance Professionals. While she was still in the Philippines, Evie and Watson became Facebook friends in 2007. She visited him in Kiowa a few times and the rest is history. The couple married Aug. 26, 2015. She explained they applied for everything and did it all "legally" – a green card, three to five years permanent residency, the fiance VISA, etc.

On Aug. 30 Evie passed her American citizenship test and interview she took in Wichita. She credits her husband for all his help with working toward her citizenship and also her search for her father.

Watson said, "I am so proud of the effort she made to study for the citizenship interview. After receiving her permanent residence status she could have lived here on it. Many people I have told about her are surprised to learn that having a citizen parent doesn't always mean that you are a U.S. citizen. Evie wanted to become a citizen and I am happy I could help her study for it."

Evie is head cook at the South Barber High School USD255 in Kiowa. Principal Brent Shaffer said about Evie, "She's a nice lady who works hard at everything she does. She wants to be one of us – wants to commit to everything being an American – even paying taxes!"

Shaffer said that when he taught American history, he always started with the citizenship test. "If you are born here (in America) you can be a citizen and hardly know anything about our country. A lot of Americans could not answer some of the questions on the citizenship test. Evi is impressive. I'm really happy for her. She was nervous, she studied hard – and all her hard work paid off," the principal said.

Evie said there were 100 questions on the U.S. Citizenship Test. It includes reading, writing and speaking. During the interview with the officer, you must answer six of 10 questions correctly, she said.

An example of questions is "How many representatives are in the U.S. House?" "What do we call the first 10 amendments of the Constitution?" "What is one right or freedom from the First Amendment?" "What were the original 13 states?" "When was the constitution written?" "Why did America fight England?"

If you want the answer to those questions, just Google U.S. Citizenship Test. You'll undoubtedly learn something.

Evie is surprised she's had so many well-wishes and acts of kindness for her efforts to become a citizen.

"I'm still floating for so much joy!" Evie said.

Her friend Vee Hill, a longtime elementary teacher in Kiowa who is now retired, had an All-American party for Evie, complete with hot dogs, chips and dips and other simple comfort foods. Of course they had Evie's favorite piña coladas she likes to make along with daiquiris.

When her friends ask Evie what she misses the most in the Philippines, Hill said she listed her children and one grandchild. Her daughter Alyssa lived in Kiowa awhile and worked as a secretary at the high school. She is back in the Philippines obtaining a master's degree. Her sons, who live and work in the Philippines, are Adrian Burdell, 28, and Arvin Burdon, 27. She's petitioned for her sons to come to the U.S.

Hill said Evie talks about how much she misses the food in the Philippines. "She loves to cook and is a very good cook. We look forward to her egg rolls. She uses sauces and seasonings in foods that are unusual to us, but mostly delicious."

"Evie is such a trooper. She is so full of energy. She's a delightful person and everybody loves her!

She laughed as she said Evie has a hard time because, "You can drive any speed in the Phillipines."

When asked how she feels finally being a U.S. citizen, Evie said, "I'm just really thrilled that this is happening. It means so much to me to be a citizen of this great country like my father. Everyone has been so supportive of me. I'm very happy!"

When Watson helped his wife search for her father they went to Ancestry.com. This led her to some of her dad's family like aunts and uncles, many of whom embraced her. Evie fought back tears that she could never meet her father, whom she found out died in 2013.

Of her search, Evie said, "It's God's will. We have to be patient and wait." She added, "Bill helped me so much."

Evie and her husband return to Wichita Sept. 25 for a ceremony where she'll receive her U.S. Citizen Certificate. Watson said they plan more celebration with family and friends for this milestone in his wife's life.