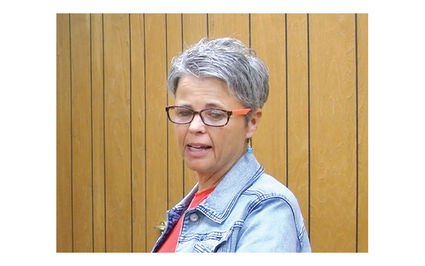 Kelly Roberts tells the Woods County Commissioners about Prayer on the Square to be held Sept. 26 at 10 a.m. sponsored by the Alva Wesleyan Church.

The Woods County commissioners approved a couple of outdoor activities on the courthouse grounds during Monday morning's meeting. Commissioners Randy McMurphy and David Hamil were present. John Smiley was absent.

Kelly Roberts of Cherokee attended the meeting to explain the purpose of an event planned by the Alva Wesleyan Church. They asked for use of the stage area on the west side of the courthouse in Alva. Roberts said Prayer on the Square will be held at 10 a.m. this Saturday, Sept. 26. The outdoor event is open to the public. Roberts said they intend to offer prayers for the city, state and nation and for all people for a time of healing and unity.

Prayer on the Square is being timed to coincide with an event on the steps of the nation's capital in Washington, D.C., on the same date. The national event is sponsored by TheReturn.org. The commissioners gave their approval.

Last week the commissioners tabled a request for a Townwide Garage Sale to be held on Oct. 17. McMurphy said he missed seeing that the paperwork submitted included the stipulation that the sponsors would make sure the area was cleaned up. Steve Foster who is in charge of maintenance at the courthouse suggested the garage sale could be set up on the east side of the courthouse parking lot for easy access. He plans to talk to the sponsors about that. The commissioners gave permission for the event to be held on courthouse property. They pointed out the rules include that no vehicles are to drive on the courthouse lawn. Magen Lehr is listed as the sponsor.

The commissioners approved road crossing permits and right of way entrance permits for the Invenergy-Sundance Wind project. McMurphy said the wind farm will be located in the southeast corner of Woods County south of Highway 45 and east of Green Valley Church extending to the county line.

The commissioners approved and adopted the Alva Arena Economic Development Project Plan. McMurphy explained this involves the TIF district for the planned arena. The commissioners held a hearing a couple of years ago and approved the district. The district will not take effect until the City of Alva decides the start date.

McMurphy said the TIF district involves ad valorem taxes on improvements. For example, if an owner is currently paying $100 in ad valorem taxes, any improvements to that property resulting in higher tax would be subject to the TIF district. Taxes on those improvements (not the original property) would be divided with 80 percent going to the arena authority and 20 percent going to the county, the schools and health department. It's just a difference in splitting taxes on new additions to property. It's assumed the arena would encourage new businesses, etc., in the area.

A video of the meeting may be seen at http://www.AlvaReviewCourier.com under the Videos tab.