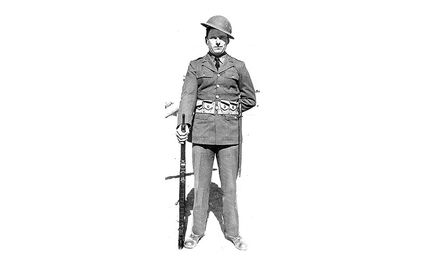 When most remember Virgil Russell, they remember a gentle, silver-haired man with a precisely trimmed mustache, probably sipping coffee and enjoying biscuits and gravy at the Freedom Corner Stop or the café. There sat a man who had lived his American dream of raising a family, being married to the love of his life for 62 years and, well past 90 years of age, ranching the land along the Cimarron River where he was born.

But Virgil's peaceful life on his farm near Freedom did not come without sacrifice nor without battling a war that lived on in his memory for a lifetime.

Born March 16, 1917, on the farm homesteaded by his father, Virgil Leroy Russell was one of 11 children of Rev. James and Amanda (Littrell) Russell. Virgil attended Fair Valley School through the eighth grade. At one fateful Freedom Rodeo, Virgil smiled at a young lady named Helen Dutton as she rode in the rumble seat of a friend's car. He later asked her for a dance and the rest is history.

After the attack on Pearl Harbor, Virgil enlisted in the U.S. Army. He married Helen on January 2, 1942, and two weeks later he reported to Ft. Sill and left for basic training at Camp Roberts, California. As a tank assistant-gunner in the 752nd Tank Battalion, Company B, he finished training in Indio, California, where General Patton himself motivated the troops. Helen traveled to California to visit her new husband for two weeks during his training, then they said goodbye for what would be more than three years until Virgil's return. She would spend the next years contributing to the war effort herself, riveting airplanes for Boeing in Wichita.

Virgil's battalion traveled by train for short stints of training in Indiantown Gap, Pennsyvalnia, and finally Ft. Dix, New Jersey. Having never been far away from home, Virgil told of his first glimpse of the beautiful Rocky Mountains as the train passed through. Barges transported them from New Jersey to board the RMS Orcades in New York Harbor, and on August 6, 1942, they sailed past the Statue of Liberty beginning their two week journey to Liverpool, England. After several months more of training in England, on January 3, 1943, Virgil boarded the RMS Reina Del Pacifico, not knowing where they were headed.

After a 10-day journey, they arrived at Oran, North Africa. Here, Virgil wrestled with his conscience and his deep Christian faith as to whether he could put another man in the sights of his tank gun. His plea was granted and he was moved to the position of tank driver. Virgil took part in training exercises in the African desert and served as a tank driving instructor to provide replacement crews to Allied divisions driving German General Rommel's army out of North Africa. He also served as a barber for his company.

Almost a year after their arrival, the North Africa Campaign came to a close, and the 752nd moved to a staging area in Tunisia where troops and equipment were readied for transport. Virgil had a good idea where they were headed when the men began lining up to change their francs to Italian lira. On January 10, 1944, landing craft infantry ships designed to transport large numbers of troops directly onto beaches left Africa and arrived in the harbor of Napoli, Italy, where they unloaded at the beach in a small town of Bagnoli. They made their camp at Eboli further inland. Virgil told of the spew and smoke in the distance billowing from the volcano, Mt. Vesuvius. In May 25, 1944, his battalion saw their first tank combat.

Later that month, Virgil's tank crew was transferred to the 1st Armored Division to replace losses sustained at the Anzio Beachhead. Allied troops had come ashore and gained a foothold at Anzio with the Axis firing from the mountains above and with air strikes from the sky. Virgil's tank was part of a formation coming from inland Italy and flanked the enemy from behind allowing the final breakthrough of the beachhead troops into mainland Italy. From there, the 1st Armored Division advanced toward Rome. Just before they reached Rome on July 9, 1944, Virgil's tank rolled over a land mine blowing the tank over on its top, with its gasoline fuel and ammo on board transforming its hull into an inferno. After several tries, Virgil escaped out the driver's hatch with severe burns, for which he was awarded a Purple Heart medal.

Virgil told of the sight of tanks rolling through the Eternal City of Rome and having some furlough time to wander the ancient city that he only knew of from the Bible. He rejoined the 1st Armored Division north of Rome crossing the Arno River on September 1, 1944, advancing to the North Appennines where they encountered several months of what he described as "lots of hot fighting through the mountains." He recalled that there were but two directions in Italy: up the hill and down the hill.

On the 1st of April, 1945, they broke through the Appennines into the Po Valley. Here, another of Virgil's tanks was hit by an enemy mortar, blowing the tracks off the tank. He claimed that you can run a mile and not be a bit tired when there are bullets whizzing by your head.

By the end of the war, his crew's tank was hit and destroyed three different times. The 1st Armored moved on to take the City of Milan on April 30, 1945, then drove the enemy north to the Alps. Virgil's tank ended up at the French Alps when the German Army surrendered on May 2, 1945.

Virgil left Italy on a B-17 to North Africa, a B-45 to Central Africa, and a C-54 to Brazil. It was here in South America that he would develop a lifelong love of bananas. He flew to Florida, then to Camp Chaffee, Arkansas; traveled by bus through Enid to Alva; then hitch-hiked the rest of the way home. Virgil was honorably discharged on August 5, 1945.

Upon his return home, he and Helen, together again, returned to the farm on the Cimarron. Their first son, Robert Devere Russell, would be born less than a year later and was named to honor Virgil's Fair Valley friend Devere "Shorty" Strohmeyer, who paid the ultimate sacrifice in the war. Five more children would follow: Sherry, Lida, Jim, Tom and Jo Nell. Virgil ranched, worked for the railroad, drove a school bus and played Yellin' Helen's Critic for many years. He was often heard beautifully singing hymns as he worked on the farm. Virgil joined Helen in Heaven on January 18, 2011, at the age of 93.

Virgil's grandkids would tell you that you always had to be prepared to cover up behind your imaginary boxing gloves or bob and weave to avoid Granddad's playful left hook or jab. Virgil Russell wasn't much for bragging, so he probably never told you that he was the recreational boxing ring champion of his Army company.

Today, we salute our Purple Heart veteran, Virgil Russell. You are a true Hometown Hero.