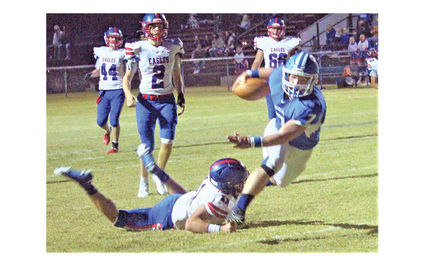 Carter Sampson (#7) heads for the end zone and is stopped at the 1-yard line by Luke Schneberger (#11). Photo by Katie Strehl

The Mooreland Bearcats took on the Burns Flat-Dill City Eagles at home last Friday night. It was the Mooreland homecoming, and the Bearcats came out fighting to score first. During the first quarter of play, both teams struggled to move the ball and neither team scored. However, the Bearcats put themselves in good position to score at the end of the quarter. Mooreland player Theo Sutton intercepted the ball and took it to the 19-yard line. With less than two minutes before the quarter expired, the Bearcats were first and 10 at the 3-yard line. Within seconds of the second quarter, the first points were put on the board, 6-0 for Mooreland. 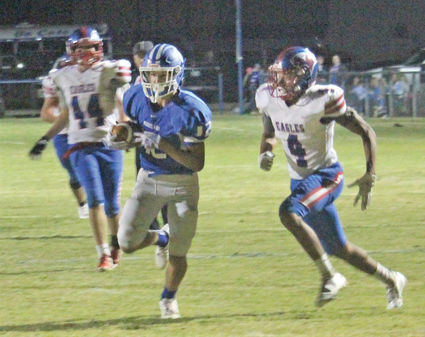 Austin Owens (#12) sprints towards the end zone before Johnathon Wheeler (4) catches him.

Mooreland would score two more times before BFDC saw the end zone. With only 25 seconds left in the half, the Eagles ran a reverse. The quarterback tossed the ball to Johnathon Wheeler (No. 4) who then threw a long pass downfield to the quarterback, who caught it and set up a first and goal on the 9-yard line. The half expired, and the score was 20-6 with the Bearcats leading.

The second half was all Bearcats, who scored twice more, making the final score 34-6.