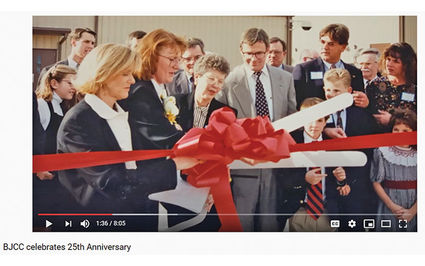 A video by Lance West celebrates the 25th anniversary of Bill Johnson Correctional Center in Alva. The video features scrapbook photos like this one and interviews with Dean Linder and Jane McDermott as well as current and former staff members. Search for BJCC celebrates 25th anniversary in YouTube videos or go to https://youtu.be/vE2De9U6VbQ

Twenty-five years ago, Bill Johnson Correctional Center opened in Alva. With concerns and restrictions brought on by the pandemic, BJCC could not hold the expected celebration. Instead, a video was produced commemorating the establishment of the facility in Alva.

Footage for the video was shot on Aug. 28 when BJCC also recognized recently retired warden Janice Melton by naming a building after her. The unveiling of the Janice Melton Administration Building is included on the video.

Later Lance West met with members of the BJCC Citizens Advisory Board, other community members and BJCC current and retired staff for interviews. The result may be viewed on YouTube. Search for the video titled BJCC celebrates 25th anniversary, or go to https://youtu.be/vE2De9U6VbQ