'Open when I am here' 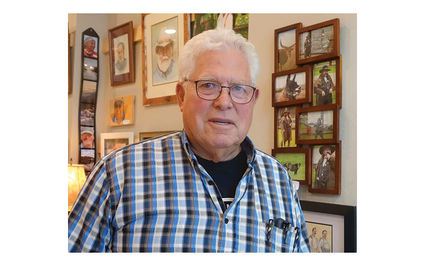 Waiting in the restaurant for his food, the white-haired man scans the other diners looking for his next victim. His smiling wife shows no concern as his gaze alights on a possibility. He spreads out a paper napkin and carefully observes his chosen subject. A pen appears in his hand, and he begins to draw.

If you've missed seeing these sketches or just want to see more, now you can. Little has opened An Old Man's Gallery featuring a collection of his photos and art. As his business card states, the gallery is "open when I am here." The gallery is located on the ground floor of the Bell Hotel in Suite 100 which used to be the hotel coffee shop. It's on the west side of the hotel lobby with an entrance from the street as well as from the lobby.

During Alva's First Friday Art Walk Oct. 2, Little opened his gallery to the public as wife Beverly served chocolate cake. While visitors toured the long, narrow room, Little regaled them with background stories about each drawing, painting or photograph.

A brilliant flower photo came from a trip to Hawaii. A sketch of several men gathered around a table is the morning coffee group at McDonald's. There's a drawing of Sitting Bull made with the usual materials plus Oklahoma dirt and Elmer's glue.

Little grew up in the Winchester community about 20 miles northwest of Alva. When he was honored as a Distinguished Alva Goldbug in 2018, Little said he loved to draw rather than study. Since he retired from farming and ranching, he's had more time to pursue his love of art.

Warren Little is well known in Alva for his quick character studies of people, often composed on restaurant napkins.

Having moved from the farm into town, Little decided to pull his work from storage and display it on these walls. The gallery also gives him a convenient place to create. His drafting table is set up facing the front windows where he can look up to see people passing by. Last Friday that table held a work in progress, a drawing of Jack Staat's grandson.

In addition to the work in his gallery, you can see more of Little's handiwork in murals around Alva. He, Jim Richey and the late Rod Dunkin collaborated on the "Castle on the Hill" mural located on the east side of the Visitor's Center on Oklahoma Boulevard. Little also painted the mural on the east side of Cookie's Bowl.

If you're in the mood for viewing some interesting art while hearing entertaining stories and perhaps a dip into area history, An Old Man's Gallery is your destination. You might want to call ahead at 580-430-5989 to make sure it's open.