Schooley's love of flying launched his 20-plus year USAF career 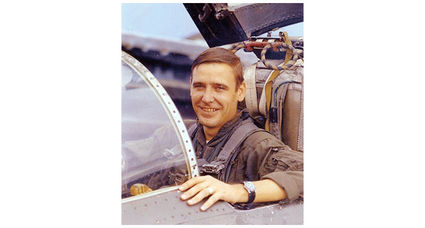 A Vietnam veteran, Max Schooley flew F-4 planes and others, amassing 3,200 hours of fighter time as a pilot in the USAF. A 1959 graduate of Kiowa High School, Schooley said he "enjoyed every second of it."

Most who know Max Schooley now see a retired man who frequents the golf course, loves to fish, hunt, snow ski and enjoy a good steak with a glass of wine. Residing at the lake near Medicine Lodge, Kansas, Schooley is a proud Vietnam veteran who amassed 3,200 hours of fighter time in the F-4, F-15 and F-16 planes, flew 173 combat missions, 62 of which were over north Vietnam, and 551 combat hours.

"What a ride," Schooley said.

Schooley graduated from Kiowa High School in 1959, the son of Bob and Maxine Schooley who were farmers. When asked about his interest in serving in the military, Schoo...