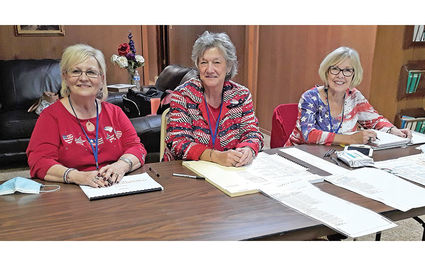 At 6:58 p.m. a Freedom voter just made it through the door to cast her vote. At 7 p.m. Vanessa Gerloff opened the entrance door and announced, "Polls are closed. The polls are closed."

"It was a steady flow of people," Janell Reutlinger said. "Only one time, around 3 p.m., did we have voters waiting in line to vote."

As of Tuesday evening the Freedom School bond issue (that is voted on in three precincts: Harper, Woods and Woodward counties) shows a close race and is too close to call with 159 votes for and 108 votes against. A bond issue requires a 60 percent majority for passage, and unofficial totals would be 59.55 percent in favor.

There is a stated discrepancy that not every eligible voter in Woodward County was given the ballot to vote for the bond issue. Therefore, the bond issue results remain unknown until every discrepancy is addressed.

It has been an exciting and emotional election season, but when the last ballot is tallied, the winners will be declared and we, as Americans, will learn to accept the results.