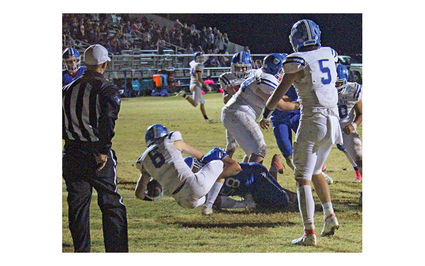 Bearcat Keeton Bowers (No. 58) takes down ball carrier Cole Cathercart (No. 6) in the end zone for a safety.

The Mooreland Bearcats met the Hooker Bulldogs last Friday night at the Mooreland field. The first quarter was a defensive battle filled with fourth down stops and penalties on both sides.

Mooreland scored first with just seconds left in the first quarter. The Bearcats began on their 36. The Bearcats strung some runs together using their running backs, Conner Scarborough (No. 27) and Stetson Roper (No. 8). Scarborough was able to advance the ball 11 yards and then an additional 10 yards after receiving a toss from the quarterback, Carter Sampson (No. 7).

A couple plays later, Roper ran the ball to Mooreland's 16. Then Sampson kept the ball. He was tackled at the 5 and it was first and goal. The next play, Scarborough took a toss from Sampson and ran it in easily. The extra point was no good. At the end of the first quarter the score was Mooreland 6 to Hooker 0. This was the only touchdown scored by Mooreland.

Hooker's defense kept Mooreland out of scoring range and their offense scored twice before the half, making the score Mooreland 6 and Hooker 14.

Mooreland came out the second half ready to go to work, but found that they could not put downs together to advance the ball to a scoring position.

Hooker scored again in the third quarter after blocking a Mooreland punt and downing the ball on Mooreland's 15 with 7:12 left on the clock. Hooker's quarterback Gavynn Parker (No. 5) connected on a pass to Hudsen Hill (No. 24) who ran the 15 yards into the end zone.

There were highlights for the Bearcats during the third quarter. For instance, the Bearcat punter kicked a punt that was downed on the 1-yard line. Then the next play, the Bulldog QB, Parker, threw an interception that Bearcat Roper (No. 8) caught. Unfortunately, the Bulldogs held the Bearcats to four downs.

Midway in the fourth quarter, Hooker had the ball on their 30-yard line. In a hand-off from Hooker QB Parker to Seth Pritchard (No. 12), the ball was knocked loose by Mooreland's John Sturgill (No. 53). The Bearcats had the ball at the Bulldogs' 28. Carter Sampson (No. 7), Mooreland QB, took his team forward by running the ball himself and tossing the ball to his running backs. 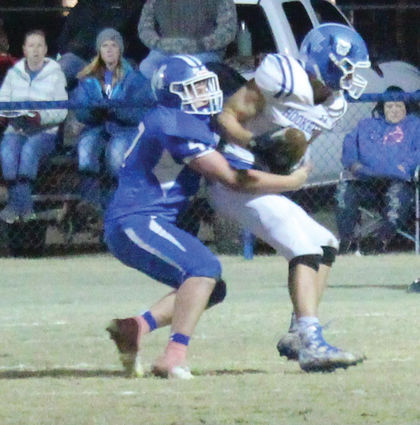 Everything was going Mooreland's way and they found themselves on the 5-yard line and first and goal. But the Hooker Bulldogs dug down and held Mooreland there, where they were turned away without any points. Hooker was deep in Mooreland territory and the Bearcats took advantage. Mooreland defensive back Keeton Bowers (No. 58) seized the opportunity and tackled Hooker player Cole Cathcart (No. 6) in the end zone for a safety.

The Bulldogs scored one more time with about three minutes left. It looked like Mooreland might score one more time when Scarborough ran 30-plus yards to Mooreland's 8-yard line where it would have been first and goal, but it was negated by a holding penalty against Mooreland.

Time expired and the final score was Mooreland 8 and Hooker 28.

Mooreland's last home game and senior night is against Sayre on Friday, Nov. 6, beginning at 7 p.m.