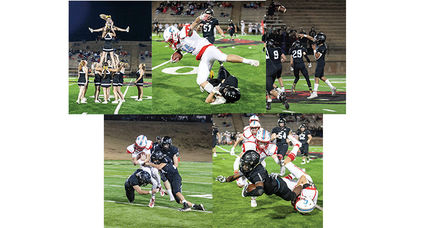 The Alva Goldbugs kept pace with the Chisholm Longhorns for the first half of Friday night’s football game. At the end of the third quarter, a Goldbug victory was still possible, but the Longhorns dominated the final quarter to win 41-6.

At the end of the first quarter, the Longhorns led 8-6 with the only difference being two-points from a safety. That score held through the second period with neither team reaching the goal line. Chisholm pulled away in the third quarter 16-6, and the Longhorns really put on the pressure for the final 41-6 score.

Alva has continued to struggle with key players on the injured list. Those include Kaden Slater, Kory Faulkner and Gavin Perez. Freshman Daylon Malone had his third start as Goldbug quarterback Friday night in the home game.

Numerous penalties on both teams slowed play in the first quarter. Alva won the toss and deferred possession to Chisholm. Samuel Houston’s kickoff went nearly to the goal line, but Longhorn Randy Rosall made a nice return out to the Chisholm 32. Quarterback Bryce Patton attempted a flea flicker play but had to throw the ball up for grabs under Goldbug pressure. Alva was penalized for roughing the passer, giving Chisholm the first down.

Luke Balenti came in as Longhorn quarterback and ran for seven yards. Then a bad snap over Balenti’s head had him falling on the ball for a big loss. On the third down, Balenti kept the ball but was unable to regain the lost yardage. John Sheppard came in to punt but fumbled the football.

Alva took over on the Chisholm 32. Malone handed the ball to Drake Wharton, but the Longhorns were all over him. Malone was looking for a receiver while being pressured. He threw the ball, but Balenti intercepted it and raced down the field to the Alva five yard line before being pulled down. The Goldbugs were flagged for holding during the play, but Chisholm declined the penalty.

From the Alva five, Balenti handed the ball to Sheppard who carried it to the two yard line. From there Balenti ran to the left and over the goal line for the touchdown. The Longhorns set up for a two-point conversion and made it, but a flag signaled a holding penalty on Chisholm. This negated the two points and moved the Longhorns back. Heston Daniels came in to attempt a kick from the 34. It was too low, and the Longhorns settled for six points.

Following the Chisholm kickoff, Alva had a difficult position on their six yard line. Malone gave the ball to Wharton who lost three yards. A pass to Zayin Tiger was incomplete. Then Alva was penalized for a false start, moving them to the one yard line. Malone was in the end zone trying to throw the ball, but it was knocked away for a fumble. Chisholm got to the ball first and scored a safety.

With Chisholm leading 8-0, Houston kicked the ball. The Longhorns started at their 39 and immediately made a first down and more on Patton’s pass to Daniels. At the Alva 46, Patton gave the ball to Sheppard who made no progress as Alec Ferguson immediately tackled him. The Longhorns were called for a false start and moved back five yards. Chisholm regained two yards on a pass to Daniels, but the next pass was incomplete. Unable to make any headway, the Longhorns had to punt.

At the Alva 15, Malone gave the ball to Wharton who was pushed back for a loss of two. On the next play, Malone was under pressure and got rid of the ball before being tackled for no gain. Malone handed off to Wharton who found some space, running to the 35. A personal foul horse collar penalty on Chisholm gave the Goldbugs another 15 yards to the midfield stripe.

In the next three plays, Malone handed off to Wharton who gained seven yards, lost two and gained one. On the fourth down, Malone passed to Tiger. The ball was tipped but Tiger managed to snag it and ran nearly to the goal line. Alva was within three yards of pay-dirt. Malone gave the ball to Wharton who got within one yard of scoring. A keeper by Malone gave the Goldbugs their first score of the game. The Goldbugs went for two but failed. The score was close at 8-6 with Chisholm leading.

The Longhorns drew an unsportsmanlike penalty after the ball was dead, moving Alva to the Chisholm 40 for the kickoff. Houston sailed the football into the end zone.

The Longhorns advanced to their 28 before time ran out in the first period. Each team managed one more penalty with Chisholm’s for holding and Alva’s for encroachment.

Penalties slowed down in the second quarter, but neither team was able to score. Chisholm advanced from the 35 to the 41 where a bad snap on the fourth down had Patton falling on the football.

Alva started on their 49, and easily made a first down when Malone faked then threw to Tiger who went all the way to the Chisholm 37. Malone’s handoff to Wharton was fumbled but the Goldbugs recovered. After an incomplete pass, Malone kept the ball to gain four. Both teams earned offsetting personal fouls on that play. Malone handed off to Wharton who was pushed back for a loss, and Alva turned the ball over on downs.

From the Chisholm 31, the Longhorns advanced to their 47. They lost two yards when a bad snap forced Patton to fall on the ball. Daniels rushed for ten yards, but Patton’s pass was incomplete. On the fourth down with two yards to go, Balenti came in at quarterback and ran up the middle. The chains had to be brought in to measure, but it was ruled a first down.

At the Alva 42, Patton was back at the helm. He rolled to the left and ran all the way for the touchdown. However, Chisholm was called for holding and the Longhorns marched all the way back to midfield. After getting a first down to the Alva 28 on a pass to Cody Wichert, Patton was sacked by Ferguson for a loss of four. Patton’s pass was incomplete, but he connected with Wichert on the next try to advance ten yards. Patton tried a keeper, but Devin Dowty tackled him before he could complete the down.

Alva took over at their 22 and managed two plays before halftime. The score still stood at Chisholm 8, Alva 6.

It was Alva’s turn to take the kickoff. The Goldbugs made little progress from their 24 until Malone connected on a pass to Tiger who was surrounded by defenders. That play put Alva on the Chisholm 41. Malone gave the ball to Wharton who was shoved back two yards. Malone threw a slant pass to Aiden Faison to make the first down to the Chisholm 31. As Malone handed off to Wharton, the ball came loose and Chisholm fell on it.

Patton handed off to Daniels who made it the Alva 35 before he was tackled by Tiger. Patton threw to Balenti to advance nine yards. Patton faked then fumbled the ball, but Chisholm recovered. A handoff to Sheppard completed the first down to the Alva 19. From there, the Longhorns continued to advance slowly. A seven yard run by Balenti put them within three yards of scoring. Balenti ran for the final three yards, but a flag for holding set Chisholm back to the nine yard line.

Patton lost the snap and fell on it to move the Longhorns back to the 15. From there, Patton threw to Wichert who broke a tackle and made it to the end zone. As Chisholm went for two points, Alva was called for movement, putting the Longhorns closer. This time Balenti scored, and Chisholm led 16-6.

Rossal’s kickoff went out of bounds, resulting in an illegal procedure call and setting Alva up on their 35 yard line. Malone threw to Tiger for a gain of six yards. His quarterback keeper added another three. A handoff to Wharton finished the down to the Alva 46. The drive died with an incomplete pass, a loss of five yards on a Wharton carry, and a gain of one by Wharton. The Goldbugs were set up to punt when the snap went over Houston’s head. He ran back to pick it up and was tackled at the Alva seven. Emotions were running high, and Alva was called for an unsportsmanlike penalty.

Chisholm was on the Alva four with less than a minute left in the quarter. Balenti was stopped for a loss on the first try. Then a low snap set them back further to the Alva six as time expired. Chisholm led 16-6.

The Longhorns scored as the fourth quarter began. From the Alva six, Patton threw to Wichert for the touchdown. Their conversion attempt was no good, and the Longhorns led 22-6.

Rossal’s onside kick was picked up by Wyatt Groves for Chisholm who took it to the Alva 34. From there, Patton threw to Wichert for another touchdown. The two-point attempt failed, but Alva was called for pass interference. This moved Chisholm to the one yard line. Balenti took the snap but lost the ball before crossing the line. That was capped off with an unsportsmanlike call on Chisholm. The Longhorns suddenly led 28-6.

Sion Rey made a good return on the kickoff, setting Alva up at the Chisholm 37. A pass to Tiger gave Alva the first down at the 27. Malone gave the ball to Wharton who gained three yards. Malone faked and then threw the ball to Tiger. Flags appeared with Chisholm and Alva receiving offsetting penalties. Still at the Chisholm 24, Malone dropped the ball and fell on it to lose five yards. His pass attempt to Colby Mackey was incomplete. On the fourth down, Malone passed to Tiger for nine yards, but it was still three yards short of a first down.

Chisholm took over at their 20 and advanced on passes to Wichert and Sheppard. The next pass to Wichert was incomplete as Mackey knocked it away. On the next play, Alva was called for roughing the passer giving Chisholm the first down to their 39. Patton decided to keep the ball and was sacked by Devin Dowty. Patton passed to Wichert, but it didn’t count as the Longhorns were called for holding and moved back to the 36. The Longhorns couldn’t make up the deficit and had to punt.

Starting at their 14, the Goldbugs had an incomplete pass before Malone handed off to Wharton in a counter play that resulted in a first down. Wharton gained seven more yards to the Alva 32, but three incomplete passes ended Alva’s possession.

Chisholm gained a yard, but they were set back to the Alva 45 on a holding penalty. After an incomplete pass, Patton gave the ball to Sheppard who gained five yards. At the Alva 40, Patton threw to Wichert who ran it all the way for the touchdown. Alva earned a penalty for roughing the passer to be marked off on the kickoff. The two-point attempt failed, and Chisholm led 34-6.

After the kickoff, the Goldbugs were at their 25. Malone launched a pass but it was picked off by Balenti who ran for the pick-six touchdown. Daniels’ point-after kick was good, and Chisholm led 41-6. Alva was called for a personal foul after the kick which was marked off on the kickoff.

With 2:23 left in the game, Rossal kicked the ball down the middle from the Alva 45. Offsetting penalties were called.

At the Alva 22, Malone handed the ball to Wharton who was tackled for no gain. The Goldbugs lost four yards on a low snap when Malone had to fall on it. Then a false start moved them even further back. Malone tried a keeper but was hammered back as time expired.

With the current rules in place, Alva could go on to first round playoffs with district 2A-1 facing district 2A-2. It’s unknown if Alva will decide to play. The OSSAA website shows Newkirk, the number eight team, has declined to continue.