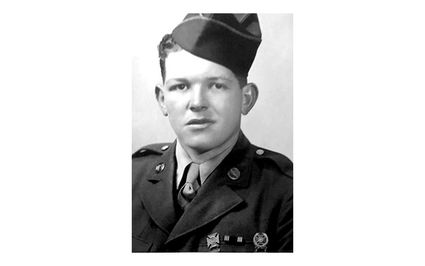 Louis Wayne Smith (Wayne) was born on his family's homestead north of Freedom, Oklahoma, on March 31, 1924, and died in the farmhouse just up the hill from the family's original homestead on March 20, 1999. He was born and raised in Freedom. After graduating in 1942 Wayne decided to leave Oklahoma to work the shipyards in California. In 1943 while in California he enlisted in the U.S. Army.

Wayne, or as his Army buddies knew him, Red (because of his head full of red hair) served in the European Theater (France and Germany) with the 782 Tank Battalion, first as an automotive mechanic then as a gunner on an 81MM Mortar dropping smoke to camouflage and protect the tanks.

Wayne at some point in his service time was granted the honor of being General Patton's jeep driver. He then moved on to drive the M34 or "Patton Tank." Fighting alongside his unit in he Battle of the Bulge in 1944 and 1945 he was awarded EAMET Campaign Medal with 1 Bronze Service Star and a Good Conduct Medal for his service.

Wayne returned to Freedom in 1945 reconnecting with friends and family. After his return he decided that he wanted to marry Norma Jean South on Easter Sunday of 1946. She said no. Norma Jean had prior plans as the angel at the tomb and assisting her mom in organizing that year's Easter pageant. They married on July 21, 1946, and never left one another's side.

Many of his stories about his time of service mention food. Wayne loved food, and recalled once having lunch with his fellow soldiers and how they didn't get much food and their rations were pretty small. They all felt hungry all of the time, especially Wayne, who even in hard times on the homestead ate well. One of his fellow soldiers accidentally dropped his rations on the bare ground. With no way of getting another serving the soldier picked it up off the ground and said "Well, it's a good thing that landed on a piece of paper!" Wayne would chuckle and point out there was no paper just bare ground but they weren't about to waste a crumb.

He would laugh as he remembered their scrambled eggs. He said it was an imitation egg mix, but the cooks wanted the soldiers to think the eggs were real, so they would put just a very few egg shells in the mix, so that way when they chewed through their crunchy eggs they could imagine the egg mix was real eggs. They were never happy about the chewing on eggshells.

Wayne spoke of being very amused with another soldier who had a strong accent, maybe from New York. He would be full of humor talking about this soldier who had never seen any real dirt or dirt roads in his life. One day they were running to get away from gunfire and the soldier yelled out "dispoise, dispoise, hit the doit!"

Wayne's family spoke of him as a very simple, caring and hard-working man. If he didn't work 12 hours a day he thought he was being plain lazy and he raised his kids the same way. His beloved wife, Norma Jean, was a perfect match for Wayne. She worked at the bank in Freedom that was founded by her grandfather, David Powers. She was an excellent cook. She cooked for all the hired hands, drove wheat trucks, helped feed cattle, milked cows, raised pigs and raised their three children (Diane, David and Denise), sewed and kept the house spotless. They both had tons of friends, and enjoyed visiting with all of them, and inviting them to play cards, eat and have a good time. He enjoyed sharing old army stories, but they were always on the humorous side. The family never remembers hearing anything about the bad parts of the war.

What he loved most was farming and ranching. Wheat harvest was what he worked for each year even though it was a stressful time wondering if Mother Nature would cooperate so the wheat could be cut. When this would happen he was very cranky because if he did not get it cut ASAP it was usually too late to get it done and this was his whole year's income.

He farmed and raised cattle. He liked to joke that he was the biggest farmer in northwest Oklahoma. He said he didn't mean that he owned more land, but he meant that he weighed more (remember the love of food?)!

Many of the men around Freedom have worked for Wayne on the farm. He had a favorite thing to say about many young men who worked for him. If they didn't have much experience, he would always say, "Well, he's a good kid, but he just don't know nothing!" He was well known for that saying.

Wayne more than once helped people out or saved them from a situation, and was referred to as a John-Wayne-like character. In 1952 Norma Jean was due to have Denise and a blizzard hit right before Thanksgiving. Wayne was not sure they would be able to get her to the hospital in time so they borrowed a four-wheel drive Jeep from Harold Kamas to make the trip. The trip took the entire day as they stopped to help motorist after motorist stuck in the snow. They finally made it to the hospital and Wayne carried Norma Jean up the steps to be sure that her and his precious cargo would not slip and fall on the snow-packed steps.

He enjoyed hunting and fishing with his friends until he got older and couldn't get around as well. He liked playing cards, mostly pitch, and checkers. His closest friends were Leon Howland, Ray King, Dale Burt, Keith Burnham, Bill Rader and Virgil Cummings, all deceased now. The ones still living (that Denise could think of) are Vic and Gene Burnham, Donald Rutlinger, Dennis Carlson, Brian Davey, Eldon Murray, Rod Ferguson, Ky Ludington, Rob, Mike, and Troy Ferguson, Stanley Schroeder and Robert Max Province and more because he always made friends easily everywhere he went. There is not a person he did not consider a friend.

He was an active member of the Hatch-Vincent Legion Post where he enjoyed being a bouncer for the Freedom Rodeo dances for years. He was also an active member of the Alva Blackwing V.F.W. Post. He received many awards over the years for his soil conservation. He and Norma Jean attended several army reunions in the 1990's enjoying reconnecting with his old army buddies.

His service to our country and community will always be cherished and missed.

Thank you Louis Wayne Smith for your service. You were a kind and honorable Hometown Hero.