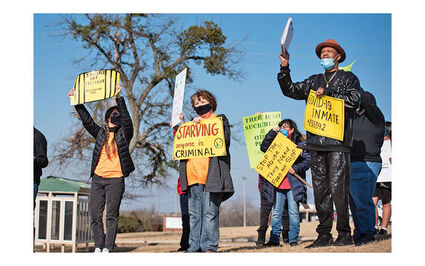 Kalyn Doctorman (from left) Rhyssa Riley and Michael Washington demanded better prison conditions during a protest outside of the Department of Corrections Oklahoma City headquarters on Dec. 11.

Avery, a former Mabel Bassett Correctional Center inmate, says the officer pulled her mask below the chin, approached a group of women and shouted "I don't care if you get sick."

Weeks later, Avery and 112 other women housed at the prison tested positive for Covid-19 in mid-August. Though her symptoms were mild, Avery says a few women on her pod had trouble breathing and were hospitalized.

The outbreak meant limited commissary access and weeks locked down. Inmates ate small portions of beans and bologna for most meals durin...