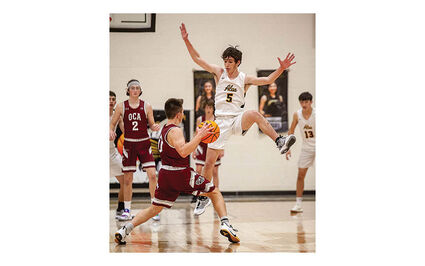 High school basketball schedules are undergoing numerous cancellations as teams are facing quarantine. Last week, the Alva High School Ladybugs and Goldbugs were scheduled to play in a tournament at Granite. That was canceled, but they picked up slots in a tournament at Oilton, located east of Stillwater. The Ladybugs won the championship, beating Frontier 42-41. The Goldbugs lost to Pawnee in the finals 41-33 to take second place.

This week Alva was to host Newkirk on Tuesday night. However, the Alva girls learned a Frontier player tested positive for Covid-19 so the Ladybugs are in quarantine. The Newkirk games will likely be rescheduled to Jan. 2.

On Thursday, Alva was to play at Fairview and on Friday they were to host Perry. Because of the Ladybug quarantine, those games were called off.

Goldbug Coach Shane Feely made a bunch of calls looking a way to pick up a game. The Oklahoma Christian Academy from Edmond agreed. Their JV boys and varsity boys came to Alva for games Thursday night.

The Alva vs. Oklahoma Christian Academy game was closely played, but the OCA Eagles were the victors 63-56. The Goldbugs missed the playing of Kyler Penco who has been accurate from three-point range. It's hoped he'll be recovered to play in today's Pioneer game.

The Eagles led at the end of the first quarter 13-10, but the Goldbugs pulled ahead in the second to lead 26-23 at the half. OCA managed to hold Jackson Feely to just four points in the second half after he made 15 in the first half. The score was tied at 40 after the third quarter. The Eagles outscored Alva 23-16 in the final period to win 63-56.

At halftime, Feely led the Goldbug scoring with 15 followed by Braden Hofen with four, Donald Blalock with three, and two each for Austin Reed and Cole Hague. Karson Fellers had seven points for the Eagles followed by Carter Owens with six, Xavier Salyer and Thompson Whitehead with three each, and Kemar Crawford and Logan Williams with two apiece.

When Feely was kept away from the goal in the second half, Hofen stepped up to add 13 points. Meanwhile both Chuck Shelite and Hague fouled out. Alva scoring was led by Feely with 19 while Hofen had 17. Reed made six points in the game followed by Shelite and Blalock with five each. Hague and Phillip Randall scored two points each.

For the OCA Eagles, Fellers led with 27 points; 20 of those were scored in the second half. Thomas had 17, Owens six, Whitehead five and Salyer four. Williams and Crawford had two points each. 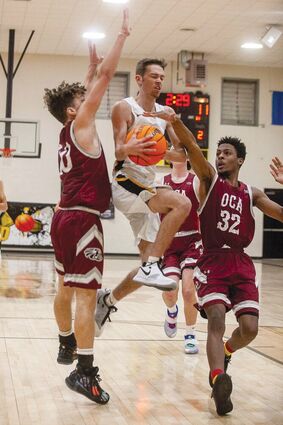 Alva's Cole Hauge (1) went up for a layup and was fouled by the Oklahoma Christiian Academy defense.

The teams had fairly even statistics with Alva scoring on 19 of 44 basket attempts while OCA was 19 of 45. Alva had 30 rebounds and OCA 26. Turnovers were a problem for both teams with Alva having 23 while OCA had 21. The biggest difference was from three-point range with the Goldbus making three of 11 shots while OCA made six of 16.

The Alva Goldbugs now have a 2-3 season record while the Class 2A OCA Eagles move to 3-2.

Alva will play Pioneer at 4 p.m. today, Dec. 18, at Timberlake High School in Helena. Then the Goldbugs will be on Christmas break. They will probably play Newkirk in rescheduled games in Alva on Saturday, Jan. 2, followed by the scheduled games hosting Blackwell on Tuesday, Jan. 5. After that, the Alva teams are headed for the Wheat Capital Tournament at Chisholm Jan. 7-9.