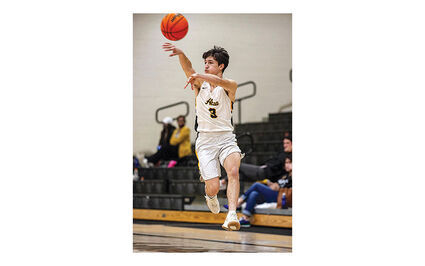 Alva's Austin Reed throws the ball to his teammate mid-sprint down the court.

When the Ladybugs had to quarantine due to Covid exposure, Alva Goldbugs coach Shane Feely picked up a couple of games for his team before the holiday break. From the start of Tuesday night's game against Blackwell in Alva, the Goldbugs looked ready.

Blackwell, 0-5 on the season, has been struggling after graduating several good players. Leading scorer Worthy Shepherd is out with an ACL injury.

The Alva Goldbugs dominated the first half of the game. As Alva began emptying the bench, Blackwell was able to score a little more but couldn't make up the deficit. The Goldbugs won 57-23.

The first quarter was all Alva. Austin Reed put up a three-pointer to open scoring. A bit later Kyler Penco added another Goldbug three. Baskets by Shane Feely and Penco put Alva at 10-0. Reed added a free throw.

Although Blackwell couldn't seem to hit a basket, the Maroons were doing a good job keeping the Goldbugs away from under the net. About the only option was from three-point range. Feely sank back to back threes for the 17-0 Alva lead at the end of the first period.

The Goldbugs continued to hold the Maroons scoreless as Reed hit another three, Feely made a basket, and Penco scored twice from three-point range. Alva now led 25-0. After several missed looks at the basket for both teams, Reed scored a basket. Collin Prince hit a three to finally get Blackwell on the scoreboard. Reed followed with an Alva three, and the score was 30-3 for the Goldbugs.

Charlie Lux scored for the Maroons, but Feely added two for Alva. As time ran out, both teams tried for points but nothing was going in. At the half, Alva led 32-5.

The third quarter was more of the same until Alva began to remove their starters. Hindman scored for the Maroons, but Penco hit a basket and a three-pointer to increase Alva's lead to 34-8. Hindman added a trey. Braden Hofen hit a Goldbug basket and was fouled. He missed the free throw, but Alva led 41-11.

Feely scored another basket. Hofen's scoring attempt was foiled but he was fouled and went to the free throw line. He missed both chances. Hindman scored for Blackwell. Hofen again found himself on the free throw stripe, but this time he hit both shots. Alva now led 43-13.

Coach Feely began changing out players, and only two Goldbug starters were on the court. Peyton Jones made back to back baskets for the Maroons followed by a Hofen basket for Alva. Jones added another basket, but Penco blocked Hindman's try just before the third quarter ended. Alva led 49-15.

The Goldbugs began the final period with only one starter in play. Hindman scored twice from the free throw line for Blackwell followed by a basket from Aaron Rascon. Alva now led by 30 at 49-19. 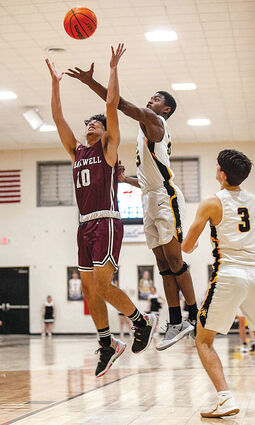 Alva's Braden Hofen jumps over Blackwell's Skylar Landwehr (10) to get the rebound during Tuesday night's game.

Jaxson Jones went to the free throw line, missing the first and hitting the second. But that point didn't count due to a lane violation. Soon Jaxson Jones was at the line again. This time he hit both baskets. Daylon Malone stole the ball from the Maroons and passed it to Jordan Lohmann who scored. Another steal by Malone and feed to Lohmann did not work so well although Lohmann was fouled. He was unable to score from the charity stripe. Blackwell's Lux hit a basket followed by one from Alva's Drew Glass. Hunter Miller scored for the Goldbugs. The final basket came from Peyton Jones for the Maroons, and Alva won 57-23.

Feely led the Goldbugs in scoring with 14 following by Penco with 13 and Reed with 12. Hofen and Jones each had six. Glass, Lohmann and Miller scored two apiece.

For Blackwell, Hindman led with nine points followed by four points each for Lux and Jones. Prince had three and Rascon two.

Both teams were headed to the Wheat Capital Tournament at Chisholm on Thursday. Alva was to play Chisholm at 2 p.m. while Blackwell faced Kingfisher.