Alva's Mason Bogdanovecz (3) gets fouled in a "sandwich" between two Garber players as she tries to go up for the layup.

The Alva Ladybugs faced a somewhat unknown Garber Wolverines team in the first round of the Wheat Capital Tournament at Chisholm Thursday afternoon. Garber is ranked sixth in Class A while the Ladybugs are fifth in Class 3A. However, a look at the Garber bench showed a lot of tall players on the opposing team.

Garber got off to an early lead, but Alva stayed fairly close in the first half. Garber continued to widen their lead, but the Ladybugs cut down the margin near the end of the game. Alva couldn't make up that final three point deficit, and Garber won 45-42.

Garber put eight points on the scoreboard before Alva's Jaedyn Williams hit a three-pointer. Mason Bogdanovicz added two free throws and Brooke Perez sank a basket to put the Ladybugs within one at 8-7. However, Garber managed two more baskets to end the first quarter with a 12-7 lead.

The second period began with baskets from Cynthia Samaniego and Chloe Durkee for Alva. Ashlan Light scored for the Wolverines and was fouled. She hit the free throw for a three-point play. Sierra Martin scored her only basket in the game, and Garber led 19-13. Durkee sank a three-pointer for Alva, but Tori Johnson added three for Garber. Durkee narrowed the margin with another three, but Light came back with a trey, and Garber led 25-19.

Grace Howry scored for Garber while Light sank another three. Bogdanovicz made both points of a one-and-one free throw opportunity to end the half. Garber led 30-21.

Leading the first half scoring for Alva was Durkee with eight followed by Bogdanovicz and Perez with four apiece. Williams had three and Samaniego two.

Garber was led by Light with nine while Johnson had seven. Kathryn Plunkett, Howry and Kamilah Gay each had four. Martin scored two 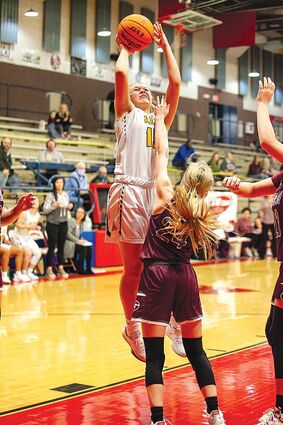 Alva's Brooke Perez (15) got the rebound and goes up for another chance at the goal.

Williams opened the fourth period with an Alva three followed by a three from Johnson for Garber. Plunkett added a basket, and Rianna Clark scored. The Garber lead was 45-34. Durkee sank one from three point range, and Clark added another basket for Alva. Then Williams hit a three that narrowed the Garber lead to three. Although the Ladybugs tried hard, they weren't able to get the ball through the hoop, and Garber won 45-42.

Williams finished the night with 15 to lead the Ladybugs followed by Durkee with 11. Perez had six, Bogdanovicz and Clark scored four each, and Samaniego had two.

For Garber, Light led with 15 followed by Johnson with ten. Plunkett, Howry and Gay had six each, and Martin finished with two.

The Ladybugs will play in the consolation bracket today (Friday) at 12:30 p.m. against the Oklahoma City Knights, a homeschool team. The Knights were defeated by Kingfisher in the first round 72-17.