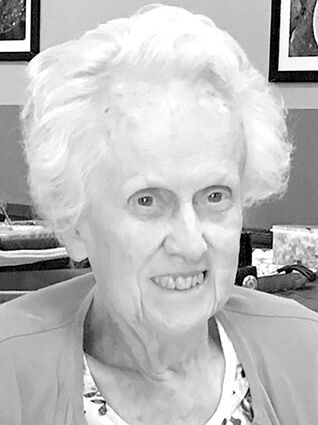 Wanda Mae Hobbs Cox was born on August 4, 1934, to James and Maude Hobbs in Mayfield, Kansas. She was the only girl with three older brothers and one younger brother: Junior, Bill, Don, and Richard "Dick" Hobbs.

On January 25, 1951, Wanda married Joe Cox at the court house in Medicine Lodge, Kansas. Joe had to borrow $20 from Lamoine Woodson to marry his bride, and many said it wouldn't last a month. The couple was just three weeks shy of their 70th wedding anniversary.

Wanda was a homemaker for many years raising their family of three boys: Bob, Jim, and Bill and one daughter, Cindra. Once the children were in school, Wanda began her long career of cleaning houses around Kiowa. One home she cleaned in particular when she first started was for Bubb and Mary Miller, and before she hung her broom up for the last time 50-plus years later she was still cleaning Mary's house!

One of her favorite things to do was attend the dances at the Vets Building on Saturday nights, where she enjoyed watching her favorite guy, Hank Thompson, perform. Wanda had a passion for collecting antiques, knick-knacks and all kinds of chickens.

Wanda became a resident of the Kiowa District Hospital Manor in October of 2019, and passed peacefully there on January 4, 2021, at the age of 86 years and 5 months. She had all the staff convinced that every day was her "birthday," so they would treat her with her favorite breakfast of strawberries and waffles nearly every day.

"Wanda was honestly the highlight/fun part of our day. She was funny and we loved her here!" (– a message received from a staff member.)

Wanda is preceded in death by her parents, James and Maude Hobbs; all four brothers; two granddaughters, Kristin Ann and Barbara Lynn Cox, and son-in-law Monty B. Williams.

A private service was held on Friday, January 8, 2021. Arrangements were by Lanman Funeral Home Inc. of Kiowa. Online condolences may be made at http://www.lanmanmemorials.com.

Memorials may be given to Kiowa District Manor Activity Fund through the funeral home.