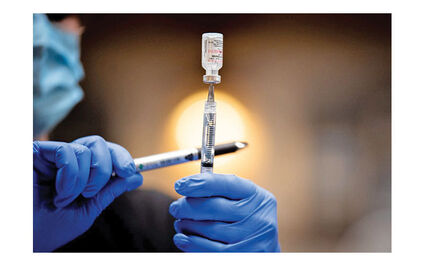 A health care worker fills a syringe with the Covid-19 Pfizer vaccine.

Oklahoma inmates are experiencing their own version of pandemic fatigue.

The corrections department has limited inmate movement and enforced a mask mandate for staff and prisoners since April. A system-wide lockdown prompted by gang fights at the three male prisons in late November has added an additional layer of restrictions over the past several weeks.

A successful Covid-19 vaccination effort could reduce cases and deaths and allow the return of family visitation and in-person classes. Shipments of the vaccine should start arriving at prisons, jails and other congregate living facilities by the end of the month, state deputy health commissioner Keith Reed told Oklahoma Watch in an email.

Some inmates, aware of the history of medical experimentation on prisoners, remain skeptical about taking the vaccine.

Abigail Jackson, a Lawton woman whose fiancé is incarcerated at the North Fork Correctional Facility in Sayre, said some inmates at the facility are concerned about long term side effects and will wait to see how the vaccine affects their peers. She said her fiancé plans to reject the vaccine when it becomes available.

"He doesn't want to be a test dummy," Jackson said. "He wants to be healthy but feels like all of this was rushed."

Speaking on the condition of anonymity due to fear of retaliation, a medium-security inmate at the Lexington Correctional Center said most prisoners in his unit are open to taking the vaccine because they want to "return to their version of normal." The absence of family visitation has caused some inmates to lose their sense of hope and purpose, the inmate said, and prisoners have received little outdoor recreation time since March.

Oklahoma corrections staff will receive access to the vaccine at the same time as inmates. Arguing that prison and jail workers are the most likely group to introduce Covid-19 to an inmate population, seven states have prioritized corrections staff for vaccination ahead of inmates, according to data compiled by the Prison Policy Initiative.

A high vaccination rate among corrections staff could reduce the likelihood of spread among inmate populations and communities surrounding rural prisons. But similar to inmates, some corrections staff are concerned about possible long term side effects from taking the vaccine.

"I've heard from a number of officers who say they aren't going to take it," said Bobby Cleveland, executive director of the Oklahoma Corrections Professionals group. "And if it comes to losing their jobs, we'll fight it."

Vaccination will be optional for inmates and staff. According to corrections department spokesman Justin Wolf, the agency determined that it does not have the authority to require that inmates take any form of vaccine.

The U.S. Supreme Court set the standard for vaccination law in 1905, when it ruled in Jacobson vs. Massachusetts that states have the right to force citizens to get inoculated. However, legal experts say the threat of refusing government services to a person who declines vaccination raises constitutional questions.

Last month the corrections department began surveying both groups about their willingness to take the vaccine. The survey form lists possible side effects, such as fatigue and swelling around the injection site, and states that inmates who choose to take the vaccine will be required to receive two doses.

The risk of future coronavirus outbreaks in prisons will increase if a high number of staff and inmates choose not to take the vaccine. Covid-19 herd immunity may be achieved when 80 to 90% of a population has been vaccinated or infected, health experts say.

As part of an educational effort to encourage vaccination, Wolf said the corrections department has provided inmates and staff with informational flyers about the vaccine and what potential side effects may be. Informational messages about the vaccine have also been played on common room televisions, he said.

As state health officials aim to vaccinate as many Oklahomans as possible, inmates who reject the vaccine whenever it's initially offered and later change their mind will likely be left waiting.

"We're not going to sit on a priority group and wait for everybody within that group to come get vaccinated," said Keith Reed, deputy commissioner at the Oklahoma State Department of Health, said during a Dec. 11 virtual press conference. "We're going to move onto the next group. We want to get this to people as quickly as possible."

U.S. prisons have been disproportionately affected by the pandemic. As of Dec. 18, one in five prisoners nationwide had contracted Covid-19, according to data compiled by The Marshall Project and The Associated Press, a rate four times greater than the general population. Health experts say the number of inmate Covid-19 cases is likely undercounted.

In Oklahoma, more than 6,800 inmates have tested positive for Covid-19 and 22 have died. The state Medical Examiner's office is investigating 21 other deaths possibly related to Covid-19.

More than 850 state corrections staff have tested positive for Covid-19. While the corrections department reported three staff deaths related to Covid-19 in late September, the agency no longer displays staff coronavirus deaths on its Covid-19 dashboard.