Oklahoma on track for worst month of pandemic 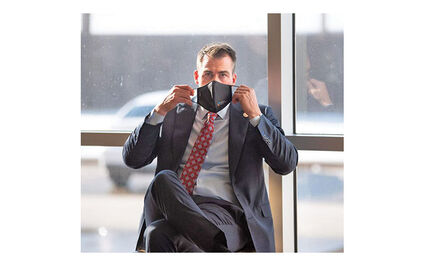 Gov. Kevin Stitt is seen putting on a mask after speaking to reporters at Integris Baptist Medical Center in Oklahoma City on Dec. 14, 2020.

By Friday, Jan. 15, the state had recorded more than 57,000 new cases of coronavirus in the first two weeks of 2021. There were 436 reported Covid-19 deaths so far in January, already higher than the entire number of reported deaths in November. The state reported 746 deaths in December, although lags in reporting could mean some of those deaths came in earlier months.

Nationally, Oklahoma led the nation in test positivity in the last week, according to the latest federal Community Profile Reports, which have largely replaced the weekly updates and recommendations from the White House Coronavirus Task Force. The state was also No. 3 behind Arizona and California in the number of cases per 100,000 people in the past 7 days.

The rising case numbers and death toll from the virus overshadowed the state's progress in getting Covid-19 vaccinations into the arms of healthcare workers and older Oklahomans. The state has ranked at or near the top 10 for its vaccine rollout in the last few weeks, according to tracking data from the Centers for Disease Control and Prevention.

State health officials said they could increase the pace of vaccinations if the supply was more widespread from the federal government's Operation Warp Speed program. Earlier in the week, the Trump administration told states they could expect many more doses of the two approved Covid-19 vaccines from Pfizer and Moderna. But by Friday, federal officials said that supply just wasn't there, according to The Washington Post.

Keith Reed, deputy health commissioner at the Oklahoma State Department of Health, said on Friday he was very frustrated by the federal government's reversal.

"I was under the illusion earlier this week that there was additional supply out there and it was sitting there. But now my understanding is that we were probably getting the vaccine about as quick as it's coming through production," Reed said in a briefing for reporters. "I want Oklahomans to know that vaccine continues to come into the state. It's coming at a rate where we continue to vaccinate a lot of people. We are making progress. It's just not as fast as we want, and it's not as fast as Oklahomans want."

Reed said the state has vaccinated about 6% of its population with the first of the two-dose vaccination. More than 214,000 Oklahomans received both doses as of Friday morning, he said. The state's online vaccine portal has had almost 464,000 people register for notifications and vaccine scheduling.

Active coronavirus cases across the state reached a peak at 43,000 on Monday before falling to 38,245 on Friday. An active case is one where a person has had a positive test in the past 14 days or is seeking Covid-19 treatment in the hospital.

ZIP codes in Fort Sill, Enid, Sapulpa, Ardmore and Sand Springs had the largest increase in active cases in the past week, according to an Oklahoma Watch analysis of health department data.

Meanwhile, active cases were the highest in ZIP codes in Ardmore, Yukon and Broken Arrow. All of those places had more than 600 active cases on Friday.

Hospitalizations of Covid-19 patients remained high across the state, with an average of 1,875 patients treated in the past week. By Friday, there were 499 Oklahomans in intensive care unit beds.

I pray with my fellows friends from the Evangelical Baptist Church of Georgia for their safety: http://www.ebcgeorgia.org/