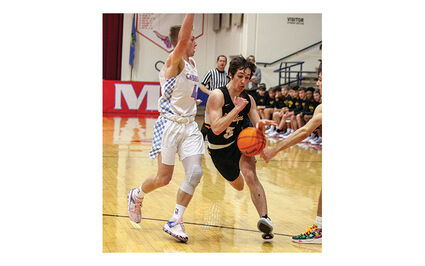 Charlie Shelite feels Chisholm's pressure as he dribbles down the court.

After taking seventh place in the Wheat Capital Tournament last Saturday, the Alva Goldbugs traveled back to Chisholm Friday night. In their last matchup, the Goldbugs lost to the Longhorns 51-43 in the first round of last week's tournament.

Recently the third quarter has been the deciding factor in Goldbug games, but this time the Alva players were ready. They outscored the Longhorns 19 to five in that quarter and won the game 43-31.

In a low-scoring first quarter, the Longhorns scored on baskets from Luke Balenti and Hunter Combs before Alva's Austin Reed sent the ball into the basket from three-point range. Heston Daniels answered with a three for Chisholm, and Goldbug Braden Hofen hit the final basket for the quarter. Chisholm led 7-5.

Scoring stayed close in the second period with Chisholm leading as much as five. Combs and Daniel started with Longhorn baskets. The Goldbugs came back with two baskets with layups from Jackson Feely and Chuck Shelite. Huston Lane hit one from beyond the arc to put the Longhorns up 14-9.

The Goldbugs finished out the half with a layup by Kyler Penco and two free throws from Hofen. At the break, Chisholm led 14-13.

Hofen led the scoring in the first half with six followed by Reed with three. Feely and Penco had two each.

Leading the Longhorn's in scoring was Daniels with five, Combs with four, Lane three and Balenti two.

The Goldbugs came out strong after the break, scoring 12 points before Chisholm got on the board. Feely and Penco both hit threes. Hofen had a basket, and Penco made three of four free throw attempts. Alva led 24-14.

Daniels went to the free throw line again for two, finishing the Chisholm scoring in the quarter. Shelite, Penco and Drake Wharton each scored for Alva to complete the third period. Alva led 32-19.

Chisholm's Balenti was in foul trouble during the second half and didn't come back on the floor until the fourth. Alva's Hofen also had four fouls.

The Longhorns opened scoring with a Cody Wichert layup. Reed answered with a three-pointer, and Penco added an Alva free throw. Combs sank three points for the Longhorns, and Alva led 36-24.

The Longhorns finished out the game with two baskets by Matthew Todd for a final of Alva 43, Chisholm 32.

The Alva win gave the Goldbugs and the Longhorns identical season records of 6-5. 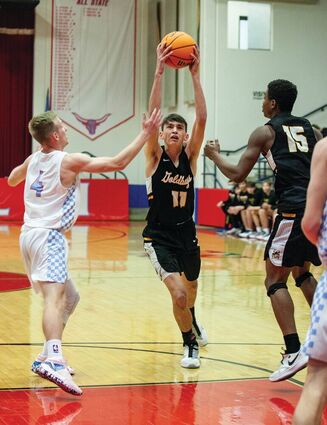 The Goldbugs made four of 11 three-point attempts and nine of 13 free throws. They had 26 turnovers in the fast-paced play.

Penco led the Alva scoring with 13 followed by Hofen with nine, Feely with five and Shelite with four. Malone, Wharton and Randall had two each.

The Longhorns were led by Daniels and Combs with eight each. Wichert, Lane and Todd had four apiece. Warnock and Balenti finished the scoring with two each. Chisholm was four of eight from the free throw stripe.

Alva traveled to Blackwell for a makeup game Saturday and won although we didn't have the final score at press time.

The Goldbugs will travel to play the Newkirk Tigers Tuesday night and head further east on Thursday for the Pawhuska Tournament. Alva will play at 3 p.m. against Tulsa CHEF.