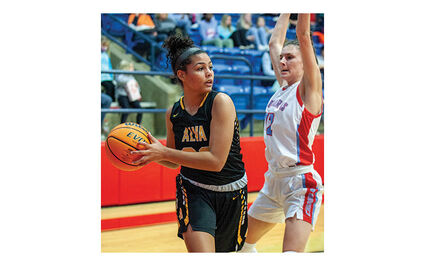 Rianna Clark gets trapped by the baseline and looks for help from her teammates.

The Alva Ladybugs went into Friday's game at Chisholm with a 6-1 record for the season and ranked sixth in the latest OSSAA poll. Their only loss was to highly ranked Class A Garber in the opening round of the Wheat Capital Tournament the preceding week. In their last meeting in Alva, the Ladybugs narrowly defeated the Lady Longhorns of Chisholm 72-70.

The Lady Longhorns were out for revenge, and the Alva team had a remarkably cold shooting night. Chisholm was first to score and led the entire game to win 61-22. The Ladybug defensive game stayed strong, and the team gave plenty of effort throughout the contest.

Chisholm jumped out to an 8-0 lead on a trey and basket from Gracie Holder plus a basket and free throw from Courtney Peterson. Brooke Perez made two stick-back attempts after a missed shot and finally scored. She was fouled and sank the free throw to put Alva on the scoreboard 8-3.

Peterson stole the ball from the Ladybugs and went for a layup to widen the margin. Rianna Clark scored on an assist from Chloe Durkee, and the Longhorns led 10-5. Chisholm finished out the quarter with three-pointers from Peterson and Holder followed by a Peterson basket. Alva had ten turnovers during the first quarter of play. At the buzzer, Chisholm led 18-5.

The Ladybugs' scoring improved in the second quarter with nine points, but Chisholm continued to dominate with 17 more. The Longhorns started with back-to-back threes from Holder and Alice Watkins. Cynthia Samaniego hit the only three-point basket of the game for the Ladybugs. Jaedyn Williams added two more Alva points from the charity stripe. The score was now 24-10.

Chisholm had scoring problems with three unsuccessful stick-back attempts on one basket. Peterson finally sank a layup. Watkins went to the free throw line and made one of two tries. Durkee missed a basket attempt, but Samaniego grabbed the rebound and the score for Alva. Chisholm led 27-12.

Peterson scored twice from three-point range and added a layup to widen the Longhorn lead. Samaniego tried for a three-pointer, but missed. Perez was there to put the ball through the hoop for Alva. At halftime, Chisholm led 35-14.

At the break, Perez and Samaniego each had five points for Alva. Clark had two and Williams two. Only three Lady Longhorns had scored with Peterson leading at 19. Watkins had seven and Holder five. Chisholm hit seven three-pointers while Alva had one.

Action was well into the third quarter before the Ladybugs could get another score on the board. Chisholm led off with two points from Gracie Winter, a Peterson three, and baskets from Watkins and Holder.

Freshman Morgan Heath broke the Ladybug scoring drought with a basket, but that was the only Alva score in the quarter. Chisholm continued with a three from Holder, a basket from Peterson and a couple of free throws from Brinidey Wilson. The third period ended with Chisholm 51, Alva 16.

The fourth quarter was much the same with both teams substituting freely from the bench. Wilson opened scoring with two free throws for the Longhorns. A layup by Clark added two points for Alva. Watkins made two from the charity stripe and Holder hit a three to increase the Chisholm lead to 58-18. Perez added an Alva basket, and freshman Triniti Miller scored while Chisholm's Paden Pasby added a three. The final was Chisholm 61, Alva 22.

Chisholm improved their record to 4-5 while Alva dropped to 6-2. 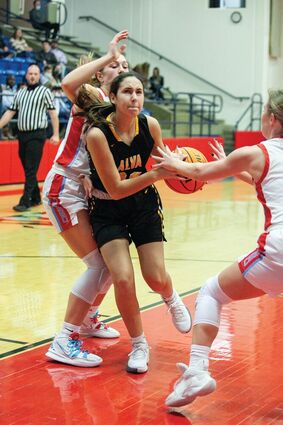 Hallie Hamilton is determined to get to the basket with the Chisholm defense trying to take the ball.

The Ladybugs had 32 turnovers and hit only one of 15 attempts from three-point range. They made three of seven from the free throw line. Perez led the Alva scoring with seven followed by Samaniego with five and Clark with four. Williams, Heath and Miller had two each.

The Lady Longhorns hit 11 of 33 attempts from outside the arc and four of five free throw attempts. Chisholm was led in scoring by Peterson with 22 followed by Holder with 17. Williams and Watkins scored 11 each. Wilson added four, Pasby three and Winter two.

Saturday afternoon the Ladybugs traveled to Blackwell for a makeup game. The Alva girls defeated the Blackwell Lady Maroons 42-21.

Next up for the Ladybugs is a trip to Newkirk on Tuesday for a 6:30 p.m. tipoff. Alva will be playing in the Pawhuska Invitational Tournament beginning Thursday. The Ladybugs will play Commerce at 4:20 p.m.