Goldbugs, Ladybugs win in first round of Pawhuska Tournament 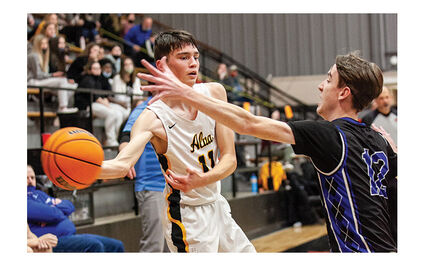 Alva's Jackson Feely (11) passes the ball around the Tulsa defense and is able to get it to his teammate under the goal.

Alva drew relatively unknown opponents in the first round of the Pawhuska Tournament Thursday but easily moved on to the winners' bracket.

The Goldbugs were up first at 3 p.m. against Tulsa CHEF (Christian Home Educators Fellowship), a home school team. The Arrows never really challenged Alva for the lead. The Goldbugs led 18-8 at the end of the first period and 36-14 at the half. In the third period, the Goldbugs scored 12 points while holding Tulsa CHEF to four. The final score was Alva 58, Tulsa CHEF 31.

The lop-sided score gave several of the younger Goldbugs some playing time toward the end of the game. Jackson Feely led the Alva scoring with 12 followed by Braden Hofen and Kyler Penco with ten apiece. Austin Reed had nine, Chuck Shelite eight, Jaxon Jones five and Phillip Randall two. 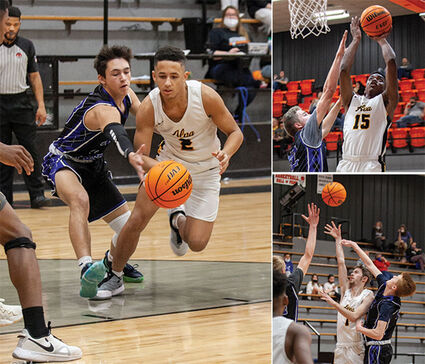 Left: Alva's Daylon Malone (2) charges to the basket with Tulsa's defense running with his every move. Top right: Alva's Braden Hofen (15) jumps up to the rim to make the shot. Bottom right: Alva's Cole Hague (1) almost gets fouled while taking a jump shot.

There's not much time wasted between games at a tournament, and the Alva Ladybugs quickly took the court to play the Commerce Lady Tigers. For fans who were wondering, Commerce is located near Miami, Oklahoma.

The Ladybugs held Commerce scoreless in the first quarter while putting seven points on the board. In the second, they widened the lead to 18-7. The Lady Tigers finally started hitting baskets in the third period, but Alva led 32-18 going into the final quarter. The game finished quickly with Commerce adding only three more points. The final was Alva 40, Commerce 20.

The Alva Ladybugs will play at 7 p.m. tonight (Friday) against the winner of the Mingo Valley and Oklahoma Union contest while Commerce plays the loser in an afternoon game.

The Goldbugs advance to play Pawhuska at 8:20 p.m. in the Pawhuska Tournament while Tulsa CHEF meets Mingo Valley at 3 p.m.