Lambert retires from career of helping and having fun 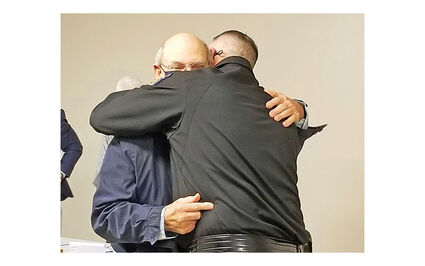 It's not often that the trainee later becomes the trainer's boss, but that's what happened with Ben Orcutt and Frank Lambert. Police Chief Orcutt told the story Monday night during the Alva City Council meeting.

Frank "The Hammer" Lambert started his law enforcement career at Northwestern Oklahoma State University in Alva in 1996. According to Orcutt, he was going to be full time, but could not attend CLEET training because of an injury so he moved to part-time in security.

When Shane Vore became chief of the campus force, he sent Lambert to the reserve officer academy in 2004. That's when Orcutt met Lambert. Orcutt was working for the campus police as a student. "This is when I fell in love with law enforcement," said Orcutt. "I remember being trained by Frank."

One evening as they were walking around NWOSU and locking up doors and talking, Lambert said, "If you're working in law enforcement and you're not helping people and you're not having fun, you're not doing something right." Orcutt said he'd never forget that.

In 2011 when Orcutt was Alva assistant police chief, Lambert called and said he wasn't working at NWOSU anymore. After he got off the phone, Orcutt called then Police Chief Gary Sanderson and said, "Boss, we've got to hire Frank. I don't want him out of law enforcement."

Sanderson said, "Frank Lambert? Are you sure?"

Orcutt said, "Yeah, I want to hire Frank." They came to an agreement, and Orcutt called Lambert back to ask him "to come to work for me."

Lambert asked, "Are you sure?"

Two or three days after finishing his job at NWOSU, Lambert came to work for the Alva Police Department on Oct. 1, 2011. He has now decided to retire, and his official retirement date was Nov. 2, 2020. He was honored at the city council meeting Monday night. Law enforcement officers, both active and retired, attended including former Alva Police Chief Gary Sanderson.

"Everybody here that's wearing a badge can tell you a story about Frank," said Orcutt, "so I'm going to tell you a few.

"Right after Frank started for us, he came to me and said, 'Boss, what do you want me to do?" 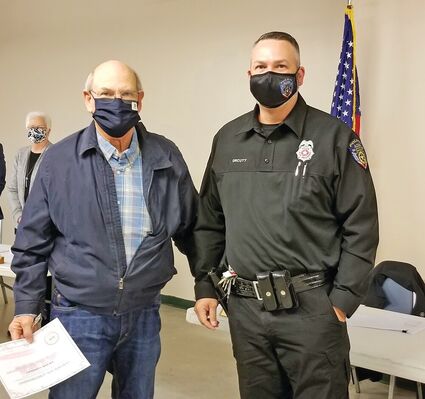 Orcutt went to Sanderson. "We'd been having some problems with people parking illegally. Frank's used to writing parking tickets at Northwestern so we said 'let's have him go write some parking tickets."

"In about a week, I got more complaints than I've had since I can't remember when," said Orcutt. "Frank comes to me in a couple of days and says, 'Ben, I need another ticket book.'"

"Good grief, Frank, how many parking tickets did you write?" I asked. There were 50 tickets in each book. "Frank wrote a lot of tickets that week! I can tell you tonight that there will never be another law enforcement officer like Frank."

Orcutt presented Lambert with his badge that was issued in 2011 and a certificate of retirement as the city council and audience stood and applauded. Then Orcutt wrapped his "very close friend" in a hug.