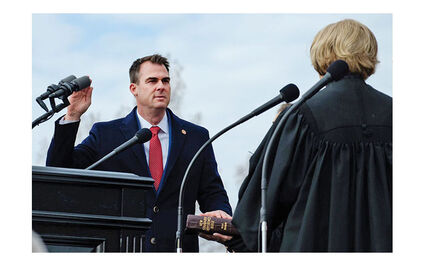 Gov. Kevin Stitt is sworn in during an inauguration ceremony at the State Capitol on Jan. 14, 2019.

Gov. Kevin Stitt finds himself in much different times than when he took office just over two years ago.

As the Covid-19 pandemic has loomed large over much of Stitt's first term, unemployment is down, the state's budget picture is shakier – but not quite as bad as some feared – and much work remains to be done to curb the virus that has already killed more than 3,420 Oklahomans in the last 9 months.

After two years in office, Stitt has also found himself on the winning and losing end of several policy battles, while much of Stitt's ambitious political and economic agenda remains unfi...