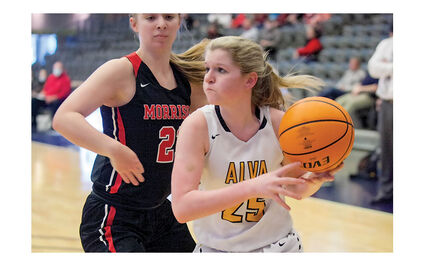 Alva's Morgan Heath (25) dribbles around the Morrison defense to get to the basket.

The Alva Ladybugs are still struggling with several of their regular starters not able to play. Alva traveled to Enid Friday for an afternoon contest against Morrison in the Downtown Enid Basketball Festival. Although Rianna Clark was able to return to play, the Ladybugs were still missing Aimee Chapman, Chloe Durkee and Brooke Perez.

The Ladybugs edged the Lady Wildcats 16-13 at the end of the first quarter, and the teams were tied with 23 each at halftime. Morrison pulled ahead in the third period 38-27, and held Alva scoreless in the fourth to win 49-27.

The Ladybugs put the first five points on the board with a Cynthia Samaniego three-pointer to open followed by a basket from Hallie Hamilton. Tate Rupp hit a basket for the Wildcats but was fouled. She missed the extra point. The Ladybugs continued to lead throughout the quarter although Morrison came within one a couple of times. Mason Bogdanavicz scored and Hamilton sank three more baskets for a Ladybug lead of 16-13 at the buzzer.

Morrison started the second quarter with Kelli Veit at the free throw line where she made one of two shots. Ladybug Jaedyn Williams hit a right wing three then Lady Cat Hally Vaughn answered with a three to narrow the Alva lead to 19-17. Both teams had unsuccessful trips to the basket before Rupp scored to tie the game. Clark got the ball through the hoop on an offensive rebound to put Alva out front. Paris Warner made one of two free throws to narrow the lead to one. Triniti Miller sank a basket for Alva to increase the lead, but Rylee Hughes was wide open for a three to tie the game at 23 all for halftime.

The third quarter opened with Morrison scoring seven unanswered points. Rupp accounted for two baskets and Mattie Wehrenberg hit a trey for the 30-27 lead. The Ladybugs fought hard but had trouble getting the shots to fall through the hoop. Morgan Heath scored on a stick-back, and Hamilton hit a basket to give the Ladybugs 27 points. Meanwhile, the Lady Cats continued to rack up the points to lead 38-28 at the end of the third. 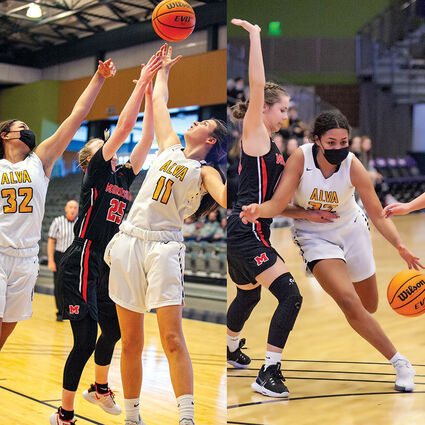 In the final period, Morrison racked up 11 more points while Alva was scoreless. The Ladybugs continued to shoot but weren't able to score. The final was Morrison 49, Alva 27.

Hamilton led the Ladybugs with 10 points followed by Williams with six and Samaniego with three. Heath, Miller and Bogdanavicz each had two. Alva's only trips to the charity stripe were in the first half when they scored on two of three opportunities.

Leading the scoring for Morrison was Rupp with 17 followed by Wehrenberg with 14. Veit, Vaughn and Warner each had five points while Hughes had two. The Lady Wildcats made eight of 14 free throws.

With the loss, Alva falls to 8-7 for the season while Morrison is now 9-7.

Next week, the Ladybugs will entertain Tonkawa at home on Tuesday at 6:30 p.m. and travel to Frontier for a Thursday game at 6:30 p.m. On Saturday, Alva will host Hooker for an afternoon homecoming game at 3 p.m.